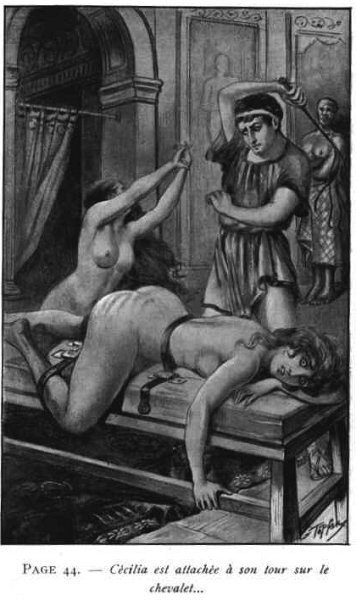 The reason for my choice of subject today is that I have finally found out where one of my favourite flagellation-themed pictures is from. It has been in my collection for ages, I downloaded it many years ago from a free site I don't even remember. It is obviously an old picture, so it is in the public domain and can be freely shared. As you can see, it shows a dark-haired, naked young woman strapped to a whipping bench of sorts and getting thrashed by a man in what looks like Roman dress. The French caption reads: "Cécilia est attachée à son tour sur le chevalet..." ("Cecilia is tied down for her turn on the rack..."). I think it is a lovely picture. Nicely drawn, with a beautiful female body - it's interesting to note both the similarities and the differences in the beauty ideal compared to today. And the action is severe, just the way I like it, while not being overly bloody.

I always wondered in the back of my mind where that picture might be from. But only recently did I, on a whim, enter the text of the caption into a search engine. Lo and behold, the origin of the picture is easy to find. It is from a spanking novel by Jean de Virgans, titled Flagelles: La Flagellation des Femmes dans la Rome Antique. The title should be easy to figure out even for those of you who do not speak French: the book is about the whipping of women in, as we assumed correctly, ancient Rome. Or rather, it's about what the author thought the whipping of women in ancient Rome might have been or should have been like. It's all wildly ahistorical, of course, but who cares when the result is such a nice picture.

Different sources I found give a publication year of 1909 or 1922. We might be talking about two different editions of the same book, or maybe one of the dates is a mistake. The illustrator was someone called Gaston Smit, who also used the aliases Georges Topfer and James Barclay. Whether Gaston Smit was his real name is anyone's guess, as nothing seems to be known about this illustrator except for the fact that he contributed drawings of corporal punishment to various books from the genre during those years. In any case, I think we can reasonably assume from the quality and the vibe of the work that both the author and the illustrator were probably not just fulfilling a market demand, but genuinely kinky people. It's nice to know that some of "us" have always been around.

My search also revealed some more illustrations from the same book: 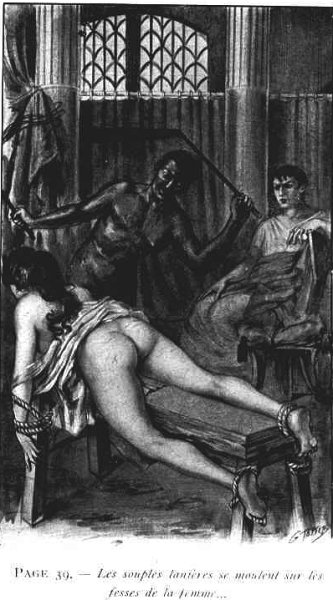 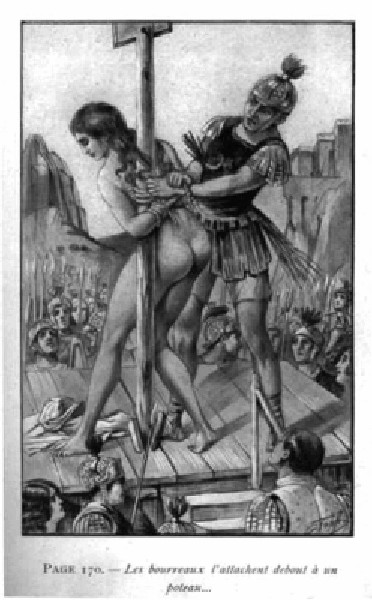 A few copies of Flagelles: La Flagellation des Femmes dans la Rome Antique are available, supposedly in good condition, from antique bookshops at a price of around 180 Euros at the time of this writing (around 230 US dollars or 150 pounds sterling). Even as an obsessive spankophile, I am not willing to part with that kind of money for a historical BDSM book. But if you are filthy rich and have more money than you know how to spend (good for you!), you might consider buying a copy and letting the rest of us know how it is.
Posted by Ludwig at 7:07 PM

Thank you Ludwig, I do like these beautiful depicted spanking drawings by this artist. They turn me on. I have always felt in life, that us 'spanko's, have an IQ mind that is way above average. In fact my favorite motto, comes from the French philospher, Descartes. Who said. "I think, therefore I am". I personally have always loved the subjects. History, and Geography. Having travelled to over 150 different international countries of this great big wide world of ours. On all 5 continents.

As you probably know, I share your preferences for Victorian Britain, the Austro-Hungarian Empire and the German Empire as setting for CP scenes for the very same reasons.

I have a soft spot my heart for illustrations from or depicting these periods as well as illustrations and photographies from the early 20th century.
Artists like Helga Bode, Eric Galton, Georges Topfer and Louis Malteste had an incredibly influence on my kink. I discovered their, in my opinion, very aesthetic drawings as soon as I had an internet access, before I even knew that there is an entire scene out there, in the real world.
I bought the book "Flagellation & the Flagellants: A History of the Rod" as ebook, but I would really like to own a copy of "Der Komplex der Flagellomanie" and "Der Flagellantismus als literarisches Motiv" by Ernst Schertel. These books seem to be quite rare.

Personally, I do not believe that the IQ of spankos is above average. Spending several years in the spanko community and meeting many different people, both online and face to face, has cured me of that delusion! My experience is that there are some very smart people in the spanko community, some very dumb ones, and a lot of people in between, with approximately the same distribution as in the general population.

@ Fenris: These sound like some intriguing artists and titles, I will have to check them out sometime.

By the way Ludwig, I liked the spanking movie that you made for the 'Lupus' group. called the "Garden Party". You sure must have had a 'spanking good time', with those folks, I sure.