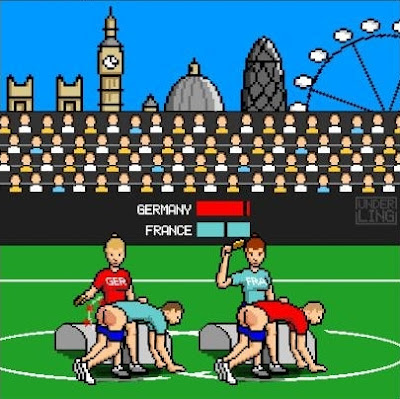 (Screenshot of Smack and Yield. Game courtesy of Underling.)

I haven't seen Ludwig in more than two weeks and I might not see him during the next one or two weeks, either. Instead, I have to deal with some work that wears on my nerves. So, what can one do in order to calm down and get rid of some of the frustration? One thing would be watching TV, for example sports. But the Olympic Games ended quite a while ago. Well, not everywhere, though.

Some creative perverted minds used the inspiration provided by the Olympic Games to come up with a kinky variant. The first one was Abel, who invented the SpankOlympics. He was followed by the Northern Spanking crew who held a Spanking Olympics event at this year's Shadow Lane party (which Ludwig and I couldn't attend due to some §&$%!?# work that wears on my nerves!). There are lots of reports about the event, for example from Indy, Zille and Emma.

But honestly, when you are frustrated because you are all alone with a bunch of crappy work, reading about other people having fun doesn't help all that much to feel happier, right? So, what about computer games, then? Usually, I'm not much of a computer game player and there's a good reason for that – the risk of becoming an addict is much too high for me!

My parents and I did not usually go to any places where one could play Arcade games when I was a child, but my cousin had a Commodore Amiga and I got to play with him during my visits. One game we played was Street Fighter II. Hey, muscular guys (and a girl!) spanking the hell out of each other, what's not to like about that? Ludwig, who played many more computer games, made the observation that players often choose characters who are very different from themselves. Which might be true – I think I remember that I often chose Blanka, a compact fighter who was half human and half animal and looked nothing like me (he definitely wasn't half dachshund). 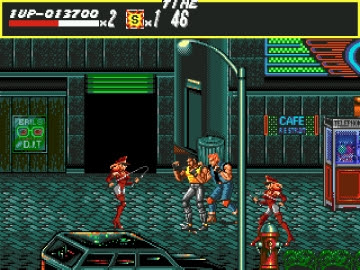 (Screenshot of Streets of Rage. Picture courtesy of SydLexia.com.)

Ludwig played another game which had even more kink appeal. See the two women figures in the screenshot above? Yes, they are carrying whips! They are part of a game called Streets of Rage, which Ludwig used to play with his friends. I guess he is lucky that he isn't predominantly a bottom, otherwise his friends might have noticed. I mean, the guy who doesn't try to avoid the lashes and mutters things like "Yes, harder, faster..." might arouse some suspicion, right?

However, we both didn't play explicitly kinky computer games before. Until now! Which brings me back to the Olympic Games. Because Underling was inspired by them as well and he invented a game called Smack and Yield (named after the classic Arcade game Track and Field) which has a wonderful retro look. You can play it for free on his site. The premise of the game is simple. Eight teams compete in a paddling event. In order to win, you have to smack the rear end of your opposing team's bottom player faster then the opposing team's top smacks your own team partner, so that the opposing team's bottom gives in first. There are three rounds, the quarter-finals, the semi-finals and the finals.

The game comes with a warning because you have to click the buttons really fast in order to win and it might cause damage to either your keyboard or your fingers. Exactly the right game to get rid of some aggressions! I started with the "Couch Potato" mode which is the easiest one. And I won gold right in the first try. Everything else would have been unacceptable, anyway! I mean, there is no such thing as a second winner. There is only victory or defeat! In case you are wondering, yes, it is no fun to go, for example, bowling with me. I mean, I can have fun and play around at work or wherever, but when it comes to competitions, it's war time and there are no friends in war.

Okay, I digress. I tried the "Spanker Elite" level next, which is the most difficult one. And that one is really challenging! On my first try, I made it through the quarter-finals but lost in the semi-finals. Of course I couldn't give up so easily. And so I made a second try, even though my fingers had started to hurt already. The semi-finals were a nail-biter and I already expected to lose again. But the match ended with a draw. Which meant, of course, that it had to be repeated. By then, my fingers were hurting quite a bit and started to clench, so I knew that I wouldn't be able to play another full game. I focused completely on hitting the buttons as quick as possible – and won the second round. During the finals, I only looked down on the buttons (instead of admiring the sweet graphic and background Underling has created) and thrashed them like my life depended on it, neither caring about my fingers nor about the keyboard. And I made it to gold! Mission accomplished, fingers and keyboard not broken (yet) and aggressions released! 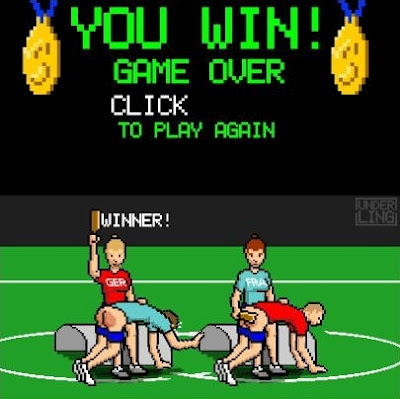 (Screenshot of Smack and Yield. Game courtesy of Underling.)

Hmm, re-reading the last two paragraphs, I am quite sure that no-one is ever going to volunteer as my bottom team partner for any Spanking Olympics. But then, if you aren't willing to sacrifice everything for the victory, you aren't the right one for my team, anyway, loser! Oops, did I say that? Time to change the subject, I think.

So, if you like retro computer games, especially kinky ones, pop over to Underling and give it a try. In my opinion, he did a wonderful job with that hilarious little game.

How about your computer gaming experiences? Any kinky games you can recommend?
Posted by Kaelah at 8:31 PM

I was a bit of an arcade game player in my youth. Although it had nothing to do with spanking (it was a space ship game), one of my favourite games was called "Slap Fighter".

I am sorry for the teen chatspeak but OMG!!!

That is so great. I love how you set it up. I love the game. Hahaha...

I am going to post about this and link to both your post and Underling's game. What a great smile!

Wow, what an idea for a game! Kinky people are so creative! I used to play Commander Keen as a kid. It was a DOS game in the 90s where a kid with a pogo stick bounced around and shot aliens. No spanking in it.

Against France ? Tsss. I tried the game too saturday on Underling's site, and I won, against... Germany.

And I hereby volunteer as your bottom team partner.

I volunteer as bottom team partner also. Do we have enough for a team?

Not that England has a great record in that department.

@ Ana:
It's really cool, isn't it? Thank you very much for having spread the word and for the link to my post as well. :-)

@ Lea:
That's the great thing about not being a kid any more, right? One gets to play the games with the really cool premises. ;-)

@ Stan/E.:
So, you won against Germany but tell me off for winning against France? Puh! ;-) By the way, I didn't always choose the German team, I played for example the Irish team as well. It's a great game, isn't it?

@ Penelope:
Welcome to the blog, thank you very much for commenting and thanks for the links on your blog to Underling's blog and to my post as well! You really volunteer as my team partner? Hmm, either you are extremely brave or just very masochistic. Or maybe both? ;-)

@ Emen:
Another brave / masochistic / suicidal? bottom! ;-) Yep, we definitely have enough players for a team, then. Penelope and you could swap places, depending on which discipline (such a fitting word in this context ;-) ) suits each of you more. :-)

@ Vincent:
You are right about England and penalties. Except for Chelsea against Bayern Munich in this year's UEFA Champions League Final that is! I would say that football is not as much fun as Underling's game, anyway, though. :-)

I hope the work frustrations don't last too much longer, Kaelah. Until then, I'm glad you have so many options for stimulating virtual entertainment!