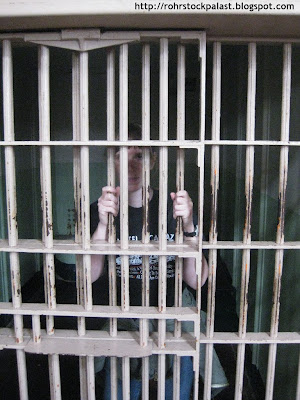 On our way to the Shadow Lane party, Ludwig and I landed in prison. More precisely, in one of the most notorious prisons ever, Alcatraz! We had used our trip the USA not only to meet friends at the party but also to do some sightseeing on the west coast. Now, I'm not too keen on kinky prison scenarios, but even for me Alcatraz was a must. And of course I hoped to be able to take the one or other kinky photo there.

Alcatraz has a very exciting history, and not only as the island that hosted one of the most famous prisons of all times. It all starts with the interesting fact that Alcatraz (island of the pelicans / seabirds) was originally the name of an island next to today's Alcatraz. But then a British sailor confused the two islands, and so they changed their names!

The first building on Alcatraz was a U.S. Army fortress which was built during the California Gold Rush in order to protect the San Francisco Bay. From 1861 Alcatraz housed Civil War prisoners. In 1867 a brick jailhouse was built on the island and from 1868 until 1933 Alcatraz was used as a military prison.

By then the need for a high security civil prison had arisen, though, and Alcatraz suited that purpose perfectly. Not because of any sharks that lived in the water around the islands, as legends sometimes say, but because the water was so cold that it was nearly impossible to survive an  attempt. So, on January 1st 1934, the famous United States Penitentiary Alcatraz Island was opened.

During its usage as a prison from 1934 to 1963, Alcatraz housed some of the most well-known and most notorious criminals of the time, such as Al Capone, Robert Franklin Stroud (the “Birdman”) and George “Machine Gun” Kelley. In Alcatraz prisoners weren't names, though, but numbers. The rules were rather simple. The most important rule for every inmate was the following: “You are entitled to food, clothing, shelter and medical attention. Anything else that you get is a privilege.” 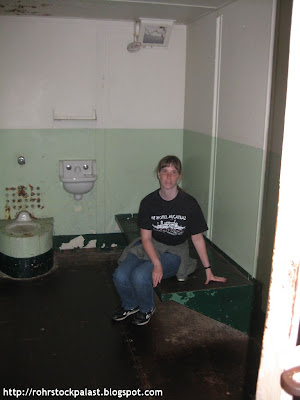 The most famous escape from Alcatraz featured Frank Morris and the brothers John and Clarence Anglin. They had dug tunnels through the back walls of their cells until they broke through to a corridor. Then one night they placed fake heads and bodies in their beds and escaped through the corridor and over the roof of the prison. Their bodies were never found, but it is very likely that they didn't survive the escape and drowned. But of course their story makes people wonder and fantasize and so it isn't a big surprise that it was used as film material. In the movie “Escape from Alcatraz” from 1979 non other than Clint Eastwood stars as Frank Morris.

From 1969 to 1971 Alcatraz played an important role in a completely different important historical event. A group of Native Americans calling themselves the “United Indians of All Tribes” occupied the island as part of their fight for improvements to the situation of Native Americans in the US. Despite of finally having to give up after 19 months due to the difficult living conditions on the island, they managed to raise a lot of awareness and to strengthen the rights of Native Americans.

Ludwig and I were lucky to get two tickets, and so we started a fascinating tour into history. Only some days later did I find out that we weren't the only kinksters who did the tour. Leia-Ann Woods has written a report about her Alcatraz experience as well. It would have been very funny had we bumped into one another on Alcatraz!

The island is very beautiful and the prison is indeed impressive. And of course it also triggers kinky fantasies! As you can imagine, it isn't really easy to take any kinky pictures with all the other people around. But those who know me a bit might have realised that I can be quite stubborn if I want something. Ludwig can definitely tell you stories about that character trait of mine...

And so, you can not only see me behind bars in the picture at the top of this post and in one of the small cells in the second picture, wearing my fitting “Hotel Alcatraz” t-shirt that reads: “The Hotel Alcatraz: Guaranteed room with a view, 24 hour security, lifetime accommodations, catering to select clientèle, bars in every room, all drinks are on the rock”. We also managed to shoot the picture below that I like very much. It was taken in one of the dark isolation cells prisoners were brought to when they had really messed up. 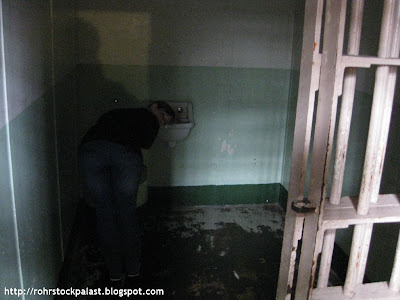 Obviously I must have done something that calls for serious discipline and the shadow in the door bodes ill... Isn't it great when one can combine historical studies with kinky fantasies?!
Posted by Kaelah at 4:31 AM

Glad to see that the two of you had fun in California! Looks like Los Vegas was an exciting time for one back-side too – Thanks for sharing! - Eric

@ Eric:
Thanks a lot for your comment! I had a wonderful time indeed and I'm glad that you enjoyed the reports.

@ Leia-Ann:
Don't worry, I know the name of the disease that's bothering you – it is called ultimate kinkiness! It's incurable, but as you surely already know one can learn to live a very happy life with it... ;-)