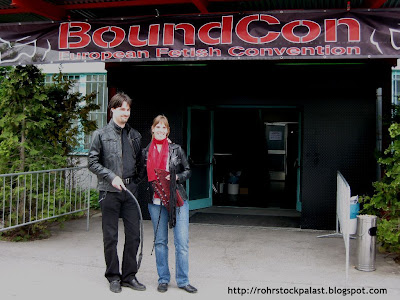 (With our new toys. Kaelah also bought a corset.)
A month ago, Kaelah and I visited the annual BoundCon fetish convention here in Munich. My last extended visit to the convention had been back in 2008. We only stayed for an hour or so the next year because I was ill, and in 2010 we were not in town at the time. So this really was the first opportunity to go in some years. We used it to say hello to our friends from SM-Circus, who had their own booth at BoundCon as they do every year, and to do a bit of shopping. I will write more about the current state of the circus in my next post and tell you about the shopping today.As an opening remark, a bit of self-demystification: my spanking implement collection is much smaller than most of you probably think it is. It can't even begin to compete with the treasure troves of some of the true hoarders out there, like Abel and Haron, for instance. I have a pretty decent collection of canes, but not much else. One crop, one (leather) paddle, and until BoundCon 2011, one flogger - that's it. Actually, the collection is quite sufficient for what Kaelah and I are doing most of the time. Add the ever-versatile hand as an implement, and maybe a switch from the outdoors, and you can do a fairly elaborate scene in terms of the spanking instruments used. But we had both been yearning for a bit more variety lately, and BoundCon was a good place to look.Kaelah, in particular, finally wanted to have a "nice flogger" in our collection. The only one we had so far, a wicked little thing with a metal handle and heavy rubber tails, is anything but nice. Many are the times when Kaelah wrote here about how much she hates that implement, to my considerable mirth, and yours too, no doubt. But lest we forget, she got her revenge by using it on me during the still-to-be-published FF/M scene we did with Leia-Ann Woods, drawing a little bit of blood in the process. Also during that scene, we got to try out some of Leia-Ann's implements on the side, including one flogger which Kaelah liked a lot: larger than ours, but with softer tails, it literally made her purr. She wanted one just like that!We found it at BoundCon. Perhaps not exactly the same model we tried out at Leia-Ann's, but very similar. A few lashes on Kaelah's clothed bottom and back convinced her that this was the nice flogger she had been looking for - the advantage of shopping at a kinky convention (instead of, say, a shop for riding equipment) is that you can try out implements on your partner without raising an eyebrow. I like the flogger a lot myself. It is heavy enough to produce a non-trivial amount of pain when used hard, but without being as brutal as the "nasty" one, so it is ideally suited for spankings of light to medium severity and for longer, sensuous whipping of various parts of the body. Kaelah already wrote about one scene where we used it under the apt title Kinky Wellness Session.We also bought a single tail whip at BoundCon, which was my wish. I would say that single tails are my favourite implements aside from canes. As with canes, they are perfect for judicial-type scenes, they have a similar "aura" and I just love the marks they produce. So it might seem surprising that I never owned a single tail until now. But they are difficult to use, even more so than canes, and I obviously would not want to use one without feeling perfectly safe with it. In my first years as a top, my main focus in regards to implements was on mastering the cane. You can see the progress I made when you compare my performance in The German Lesson (not exactly crap, but still rather hit and miss) with the later caning scenes I did with Kaelah or as a guest top at Mood (not a stray stroke, despite the much higher severity). Now that I feel reasonably proficient with the cane, I am ready to take on a new challenge, so I finally got myself a single tail.I chose a short species of single tail, some 90 cm (3 feet) in length. A bullwhip would have been too ambitious a challenge to start with, and besides, I would not even know where to practice with such a monster at the present time - certainly not indoors. The 3 foot single tail is already fairly tricky to handle and hurts like hell. I only really see us using it in video clips or in rare, special scenes in private, because the pain and the marks it produces are considerable higher than what you aim for in casual play.If you feel like it, leave a comment and tell us about your own implement collection. How big is it and which items are you most infatuated with? Did you obtain any exciting additions lately?
Posted by Ludwig at 7:10 PM

I like to collect found objects and occasionally buy things like novelty paddles at yard sales (that's like Jumble sales or Boot sales for you Brits out there).

I remember buying a novelty paddle once at a yard sale. The woman I bought it from giggled and let me know that she suspected she knew what I wanted it for.

I wonder if anyone's ever seeded their yard sales with spanko bait to lure the unsuspecting into revealing their predilections. Could be a fun sport!

I'm not too sure about the end on that single tail but the rest of it looks good and sturdy. I am a great fan of being on the receiving end of short thick single tails but have yet to add one to my collection.

I too am a little worried about the thick tip of that tail. After all, whips reduce in diameter presumably to compensate for the increase in velocity the further it is from the handle.

Whips also have an advantage in that the top can stand nearer the front of a standing bottom, which should enhance the rapport between the players.

Finally, I find that competence as a top much depends on a reasonable stiffness in the stock before it gradually relaxes into the flexible tail.

@ Prefectdt and Peter:
There is no need to worry about the tip of that single tail, the only crucial task is to strike the skin with that tip only. Ludwig and I already had a short try-out session. Unfortunately I'm not so much into single tails and that one really hurts! That said, being on the administering end might indeed be fun (tried that for two or three swishes as well). :-)

Ahem, Prefectdt, since you are a fan of single tails: I would love to have a whipping boy/man who replaces me on the receiving end and helps me as a target for my training. Interested??? ;-) Okay, okay, I assume it would be safer to practise with a cushion and I assume that Ludwig wants to spank ME with that damn thing and won't accept any whipping boy deal, but it was worth a try... :-)