Tales From The Twilight World 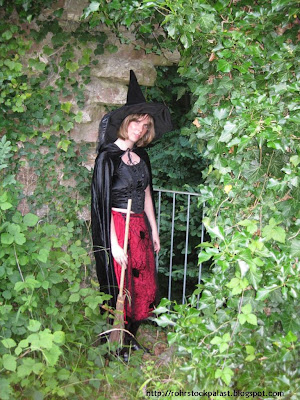 Once upon a time there lived in the forests of the kingdom of King Ka-Ter a coven of witches whose members had commited themselves to the practises of grey magic. In contrast to the covens adhering to white or black magic, the witches of the grey circle represented neither of the two dichotomic sides. Their duty and intention were based upon a more global mission which was to keep up the balance of power between white and black magic in the kingdom. Therefore they were also called "guardian witches".

If one of the two powers got strong enough to dominate the other side, the witches of the grey coven did everything they considered necessary to restore the balance of power. To achieve their mission they used white as well as black magic. All adept witches of the grey circle therefore had to learn to master both sides of magic in order to become fully fledged guardian witches. Although they didn't shrink away from using black magic when necessary, the guardian witches followed very strict principles and rules. Those rules were supposed to protect them from falling to the dark side as well as trying to shift the power to the light side. To fulfill their duty the witches of the grey coven always had to keep up an inner balance of their own light and dark side.

The following Five Golden Rules determined the living and acting of the guardian witches:

1. Preserving the balance of power between white and black magic is the primary mission of the grey coven. Therefore all decisions and actions have to be derived from this guiding principle and measured concerning their effect on the attempt to meet the objective mentioned above.

2. To accomplish the primary mission the course of action requiring the smallest possible amoiunt of interference on behalf of the guardian witches is the first choice. The course of action is determined by the circle of the most experienced senior witches of the coven.

3. Keeping up the balance of power in the kingdom may require actions causing individual suffering and harm. Both are supposed to be kept to a minimum level. If possible strong wizards and witches threatening the balance of power should be averted of their powers instead of being eliminated.

4. Adept witches and sorcerer's apprentices must not be attacked. Their powers can be averted only after they have completed their apprenticeship and made their final decision for one side.

5. The personal feelings and needs of all witches of the grey coven have to be put aside in order to focus completely and solely on the fulfillment of the primary mission. All witches owe unquestioning obedience to the circle of senior witches and their decisions.
King Ka-Ter was a powerful wizard. He was descended from an old dynasty of wizards who had ruled the kingdom for more than 1000 years. Being aware of the utmost importance of the balance of power between the magical factions in their kingdom, the kings had formed a bond with the grey coven several hundreds of years ago. The kings took care of the welfare and safety of the non-magical inhabitants of the kingdom, while the guardian witches were responsible for the balance of the magical powers.

The training of the adept witches was part of the duty of the circle and its senior witches. But it was the king who finally decided whether an aspirant became a fully fledged guardian witch at the end of her apprenticeship. Therefore every adept witch who had completed her training was sent alone to the ruin of the oldest castle of the kingdom one specially selected evening which had been agreed upon between the senior witches and the king beforehand. Among the adept witches because of its special function the castle was also known as the "castle of the final decision".

Nobody knew what happened during that night when an adept witch stayed at the castle with the king. Those who didn't pass the final test had to leave the kingdom immediately and those who became fully fledged guardian witches didn't talk about the events of that special night. All the adept witches knew was that the final test was supposed to show whether they had the abilities and the attitude which were required in order to fulfill their primary mission as witches of the grey coven. That included to strictly follow a given aim, obedience, self-control and keeping up the inner balance, willingness to make sacrifices and meekness.

Once during his lifetime the king would use one of those special nights for another very important decision. If an adept witch did not only meet all the requirements to become a guardian witch, but showed even more qualifications, and if the king was fond of her, he could make her his queen. From that day on she would rule the kingdom at his side being his equal mate. All kings had sooner or later choosen their mate that way. Of course the adept witch in question had to be a virgin which was true for almost all aspirants due to the strict rules of the grey coven.

King Ka-Ter was in the right age to find his mate but until the present day he hadn't made use of his option to choose his queen. Therefore every adept witch who finally went on her way to the "castle of the final decision" at the end of her apprenticeship was now doubly nervous...

(How that special night went for a certain aspirant will be the topic of the next edition of Kaelah's Corner... ;-) .)
Posted by Kaelah at 11:44 PM

A promising start, there, Kaelah. Reminds me of the "grey hat" hackers.