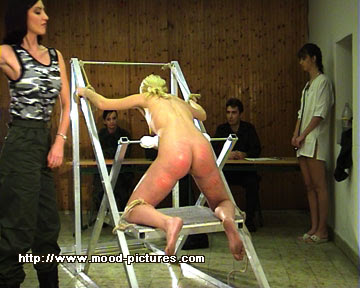 Entire Story In Fewer Words Than Are In This Sentence:
Court martial and CP for sadistic female sergeant

Victim Appeal:
After Rival Girls, this is the second (and last) Mood Pictures production starring bleach blonde vixen Kate Lust. Kate was (perhaps still is?) a small-time pornstar and webcam model from Budapest. It's a pity that she only ever did two spanking films. Like most Mood models, she was a mere "hired hand" (not really kinky), but she had a little bit of talent as an actress and brought some personality to her roles. There was a certain something about Kate Lust, an appealing nastiness, for lack of a better term, that simply made you want to spank her severely. I like the way she snarls when she plays the stereotypical "evil girl" character.

The other spankee in the video is Adrien Dark, a black-haired model who was apparently an acquaintance of Kate and got taken along to the shoot (at least that is what Kate implies in her behind-the-scenes interview). Hey, what are friends for?

Gratuitous Sadism:
As you can guess from the title, the film has a military setting. Actually, it must be some kind of war, because there is talk about "enemy soldiers". A cold war? A hot war? A guerrilla war? It is never specified who is fighting whom. All we know is that the female soldiers wear rather oversized uniforms and nobody seems to have any rank insignia. But I don't want to nitpick. Seriously, who cares what kind of war it is? My inner adolescent geek boy just loves the sight of babes in combat gear. It looks cool, no further justification needed.

Kate Lust plays a sergeant facing court martial because she tortured a captured enemy soldier, and it turned out that the captured soldier was actually an agent working for her own side (see, the plot is just as silly as the costumes...). She is brought before a tribunal and we see the torture in a flashback scene, which naturally involves the prisoner (Adrien Dark) getting caned by Kate. 25 strokes are given while the victim, with her camouflage trousers pulled down and her hands tied behind her back, is kneeling on a chair. It's a very light scene by Mood Pictures standards, with barely any marks appearing. Adrien's reactions are pretty strong, though, she cries and sobs audibly.

Of course, the sergeant is sentenced to corporal punishment for her transgression. The tribunal decides to make an example of her - she will receive 100 cane strokes, tied up, fully naked (yum!). Two things are noteworthy about the ensuing scene: first, the contraption they used to restrain the spankee is one of coolest devices Mood have ever come up with. It looks somewhat shoddy, but it makes for a highly sexy caning position, with the girl kneeling on a platform, bending forward, her hands tied above her head, her back forming a delicious line and her arse sticking out.

Secondly, the domme playing the female "CP Executioner" is pretty good. She goes by the name Mercedes Mercy and this, to my knowledge, is her only appearance with Mood Pictures. The lady has presence and the right looks for the role: thirty-something, pretty, but not too pretty. I like how she swaggers around the room. Moreover, she knows how to use a cane. While Mercedes places a few too many strokes on the back of Kate's legs for my taste, she isn't as woefully and dangerously inaccurate as some of the dommes Mood employed in later years. She has a good rhythm and makes the long scene work. The caning is harder than Adrien's, but not over the top.

Best Reactions:
I liked Kate Lust's punishment the most, even though I don't usually care for 100 stroke canings. I just find them too long and drawn-out to "hold together" as a filmed scene, and once you are past 50 or 60 strokes, you merely prolong the action instead of adding to it qualitatively. It gets boring. In this case, however, the suspense of the scene does hold together because they divide it into several segments - after every 25 strokes, a medical doctor (played by Betty Shy, in a ridiculously short white coat) performs checkups on the spankee. It also helps that Mercedes Mercy varies the intensity of the strokes somewhat, instead of hitting full force all the time.

Kate's reactions are enjoyable throughout. She throws her head back after every stroke, grimaces in pain and counts the numbers between gasps and sobs of anguish. Like the beating itself, the reactions are strong, but not extreme. The one thing I didn't like about the scene was the fact that, after stroke number 73, Kate fell unconscious and had to be reawakened by the doctor - the script makes a lot of noise about how soldiers getting caned "usually faint" at some stage. Obviously, the fainting episode was scripted, and I just thought it was unnecessary - silly sensationalism that contributes nothing to the scene and instead detracts from it (as a sidenote, Kate ends up getting a total of 102 cane strokes, because some are repeated after she faints).

The least worst line comes during the sergeant's punishment, which is being watched by the tribunal. One of the officers complains that the caning is too harsh. His superior snaps at him: "Do you want me to demote you? We're not the Salvation Army!" At least that was mildly entertaining.

Nice Psychological Touch:
Connoisseurs will notice that the film follows the same arc as "Rival Girls". First, Kate Lust is cruel towards another girl, who gets thrashed as a result. In the second act, justice is done and Kate gets thrashed herself. I like how Mood play out the role reversal in both films. In "Rival Girls", the other girl is caned by a male top (the schoolteacher) after Kate gets her in trouble. When the intrigue is discovered, the girl is allowed to cane Kate in revenge. In "Martial Law", Kate tortures the spy, and when she gets her punishment later on, the spy is sitting on the tribunal and watching it. In each case, we are not dealing with a literal role reversal (the girls don't literally switch places to spank each other), but with a more indirect and, in my view, much sexier form.
How Good Is It Really?
I retain a certain fondness for these early Mood Pictures titles and "Martial Law" is no exception. Back then, Pedro and Pablo made much smaller and more amateurish films - shorter running time, fewer spankees, smaller cast overall, more basic locations and props. However, the films had a freshness and an individual charm to them that gradually got lost over the years - which is perhaps inevitable when you are churning out one video after another. In any case, it's nice to take a look back at the old days once in a while.

In terms of story, "Martial Law" is just another spanking film about military discipline, but it executes that scenario well. Kate Lust is great to watch, Mercedes Mercy also does a pretty good job as the CP executioner. Sadly, neither of them returned for another production. The main caning scene, while not exactly light, is more moderate than Mood's later work. Consequentially, it should appeal to middle-of-the-road viewers who want to see nice and proper beatings, but are put off by blood or graphic welts. In addition to the main feature, the DVD includes a behind-the-scenes segment and a four minute interview with Kate Lust, both of which are fairly interesting.
What You Learned:
Debbie Ulan Ator, the Asian girl with the hilarious model name, plays the sergeant's aide in the first caning scene (she also appears as a prison guard in Guilty Wives). Did you know that Ulan Bator is the capital city of Mongolia? I did, but what I didn't know is that the name translates to "red hero" in English. I just looked that up. Isn't it amazing what you can learn from spanking films?

Any idea what is happening with Mood Pictures and it's sister site, Cruel Amazons? As of last night both sites were down, as were their Clips4Sale sites. This seems quite sudden and unlikely to simply be a technical glitch.

By the way, I love your blog and, especially, your dry, self-effacing sense of humor.

If the accusations are true, then they are of course very serious. I didn't see anything of the sort when I visited Mood last year - everything was 100% consensual there, and all the models were in good spirits after the shoot.

We'll have to wait and see what develops. I don't have any inside information. I hadn't heard from Pedro in weeks, anyway, and I don't know anything more than what is public knowledge at this point.

I'll probably make a post about the affair early February, by which time we will hopefully know more.