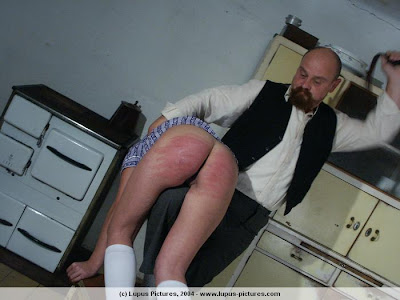 Producer:
Lupus Pictures (released in 2005)
Entire Story In Fewer Words Than Are In This Sentence:
A farmer tells Dr. Freud about his daughter
Victim Appeal:
This short, but delightful gem by Lupus Pictures stars Thomas J. Marco as an ageing Dr. Sigmund Freud, wheelchair-bound and with his face always hidden from the viewer, and Pavel Stastny as a farmer who has sexual fantasies about his own daughter (which, as the doctor assures him, is perfectly normal: "Incest is just as common as masturbation!"). The movie is set in the late 1930's, towards the end of Freud's life. While the health of the famous founder of psychoanalysis is already deteriorating, he is as eager as ever to study new and interesting cases. The two men have a therapy session at the farmer's house, where the farmer lies stretched out on his bed and recounts his "imaginations" to Freud.

In the role of the farmer's daughter and her friend, we have Eva Sulistova and Denisa Petrakova, who played the "bully schoolgirls" in The Exchange Student. Neither of them gets much to do here, as the film consists mostly of the conversation between Freud and the farmer, but it is nice to see the two actresses again. In terms of visuals, one is dark-haired and the other is blonde, both are reasonably pretty girl-next-door types. I like Denisa, she's cute in her way.

Lupus show actual visualisations of the mental images, as well as flashbacks of what happened between the farmer and the girls. All the "action" is filmed in normal colour while the therapy scenes are held in grainy black and white. Eventually, it transpires that the farmer spanked the two young ladies when he caught them pleasuring themselves. After a brief incest scene with the daughter (fondling and caressing) and the masturbation scene, a pair of punishments with a thin switch constitutes the climax of the film in terms of CP. Lying down flat on a wooden bench, each of the victims gets 40 strokes, producing nasty, vivid stripes.

After the farmer finishes his story about the thrashings and how much he enjoyed them, Freud diagnoses him with "pathologic compensatory sadism". He encourages his patient to beat his daughter regularly, because it will be "therapeutically beneficial for both parties" - educational for the daughter and an outlet for the father's forbidden sexual desires at the same time. The farmer is only too happy to follow the recommendation. As the movie closes, we see him with the girl over his knee, spanking her with a belt (3o strokes are shown). When she protests "But Dad, I didn't do anything wrong!", he cheerfully replies: "I know, but this was prescribed to me by a doctor."

Best Reactions:
All three corporal punishment scenes in the film are so quick and casual that they are almost an afterthought - they start without buildup, they go on for a while, the pace is very fast, then they just break off. While the action is pretty severe as usual, it goes by without leaving much of an impression, which is intentional. Clearly, Lupus are firmly focused on the humour and the dialogue between the two men in this little project, not on the girls or the spanking action. If I had to choose between the two victims, I'd say that Denisa has the more enjoyable reactions, but it probably has more to do with her hair colour and the fact that I have a thing for blondes than with anything else...

Best Line:
As they begin their session, the farmer tells Freud about the doctors who visited him before: "They told me I was phlegmatic - but I don't care."

Nice Psychological Touch:
Needless to say, there are many Freudian in-jokes here, but surely the nicest psychological touch of all is to make a spanking movie starring the doctor as the title character in the first place!

How Good Is It Really?
In terms of actual CP, "The Last Case of Dr. Freud" is pretty forgettable - two and a half action scenes rush by hard, fast and with barely a trace. As an eccentric short film, it is wonderful and a must-see for Lupus fans. In the space of only 20 minutes, it contains more humour and wacky ideas than some spanking video producers manage in a lifetime. Beneath all the "hilarity", it is also a pretty dark little treat when you come to think about it.

The rambling conversation between Freud and his patient, with their various communication problems, is loads of fun indeed. Not all of it is laugh-out-loud on paper, but the two actors make it work. Thomas Marco is especially memorable as the doctor, all the more so because we only ever get his voice and his shaking hand.

What You Learned:
Apparently, "birdy" is a Czech slang term for the female genitalia.

I'm fascinated. That's a Lupus film I'd see in a heartbeat! :)

Of course I haven't seen it yet, but this film sounds like an interesting change of pace in spanking films (not surprising since it's from Lupus).

I love the idea of the focus of the film being on the men/man and what's going on in his head. So often the characters of men in videos are completely undrawn -- they're defined only as authority figures who mete out required punishments.

This is novel and centers the story on the spanker with the spankee(s) as just the shadow characters.

That sounds really cool. And I think the Freud-interprets-everything-literally bit is hilarious (well, I also haven't seen it, but it sounds hilarious.) I remember that when I was in Prague, I was oft reminded that Freud was actually born in Moravia and not in modern-day Austria — so perhaps this film is like a patriotic tribute of sorts.

Oh, this sounds HOT. Even if the CP scenes are a bit dismissive, the whole concept of undeserved, doctor-prescribed punishment is one that makes my heart skip. Thanks for the review, I hadn't heard of this one before! I shall have to treat myself at some point :)

"..What You Learned:Apparently, "birdy" is a Czech slang term for the female genitalia..."

unfortunately, there was realy many problems with translation of their missunderstandings :-)

The farmer tells the doctor that he saw his daughter and her friend playing not with their birdies - birdie is not the exact term - I dont know the right translation for very small duck - baby duck - quack-quack... - "baby duck" is the synonymum for girls genitalia here - and thats why those girls in Freud imaginations playing with small rubber ducks, but in farmers mind with their genitalias....

Thomas: Thanks for clearing that up. A baby duck would be a "duckling" in English. Interesting! Several languages have slang terms for the female genitalia which are derived from cats (like "pussy" in English or "Muschi" in German), but this is the first time I hear "duckling" associated with it... Or any kind of bird, for that matter.