Oh well. A whole week has passed since the last post. So much for my recently published plan to be back on schedule by May 1st! I will still get there eventually and fulfil my quota of posts for 2009 - sooner or later. I'm no longer going to make predictions about the exact point in time, though. Even without the blog and the email correspondence that accompanies it, my life is pretty busy at the moment.

The lastest delay was mainly caused by two things. First, a discussion on an online spanking forum, involving a bunch of rather hysterical characters who asserted (with lots of emotional venting, but very little in the way of actual argument or evidence) that severe CP videos are inherently immoral, that they probably feature loads of drugged, trafficked girls and that everyone who watches such vile material - or, God forbid, stars in it! - must be a borderline sociopath. I tried to inject some facts and a bit of calm, rational thinking into the debate, but to no avail. Waste of effort, really. I should have known better than to try and reason with people who proclaim their own subjective tastes and feelings as moral absolutes and scientific truth.

(As Adele Haze once told me, speaking with all the wisdom that comes with having been a spanking model for several years: "I won't get into [these discussions]. When people are being stupid, I tend to want to tell them they're stupid. Rudeness doesn't win arguments, but is so hard to keep from... Sigh!" I know how she feels. Still, I tried to stay polite, and I hope that some of the people from the "undecided" faction read my posts and found them somewhat useful at least...)

The other event pushing this post back was far more pleasant, though: a friendly little Klingon invasion over the weekend. Actually, they are a regular feature of my life these days. Only half a year or so ago, that would have been unimaginable - see, I may be a fairly typical geek in many ways (horror films, fantasy role-playing games, heavy metal music...), but I was never a Star Trek fan. For some reason, I never got into that. But now, in recent months, I've become something of a Trekkie by association. It seems that my rampant geekdom has reached its next and ultimate stage.

It fits well with my spanko-ness. Did you know that the Klingons, the famous fictional warrior race from the Star Trek universe, have rituals that involve "pain sticks" and other cool, kinky devices? They do! I swear, some of the writers behind this stuff must be perverts like us. One of my blog readers, who has been a Trekkie far longer than me, alerted me to the fact that the "Encyclopaedia of Klingon Culture" - a non-canonical resource, but very popular among fans - actually mentions a "Rite of Span'qIng". Get it? "Span'qIng", I kid you not! At first, I thought someone was pulling my leg, but I checked out a copy of the encyclopaedia at my local geeky gaming shop, and that entry really exists (p. 222-227). 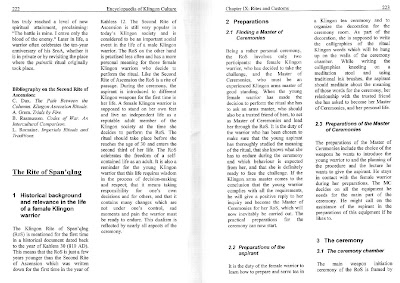 ("Kinky" excerpt from the "Encyclopaedia of Klingon Culture")
It describes, in great detail, how a "female Klingon warrior" must search for an "experienced arms master" to perform this important initiation ritual with her (apparently, it is supposed to be the counterpart to the "Second Rite of Ascention", which is for men only). The "Master of Ceremonies" introduces the female aspirant to several Klingon weapons, including the "nonelectric wooden" version of the pain stick, by demonstrating their effect on her body. Once she has sufficiently proven her bravery and her resistance to pain in the master's eyes, the rite of passage is complete and the two of them "celebrate the initiation of the young warrior" by drinking tea together (a Japanese-style tea ceremony marks the beginning and the end of the ritual - nice touch!).

Obviously, this glorious piece of fan fiction comes straight from a fellow spankophile's brain, and it's quite well-written, too. I scanned it and made a .pdf document for those of you who want to read the whole thing. You can download it here. Who knows, it might revolutionise your idea of Star Trek - no one said that being a geek can't have its sexy sides!

Next week, I will tell you more about the mysterious, life-changing invasion hinted at in this post. In the meantime, I hope you enjoy this wonderful excerpt from the Klingon Encyclopaedia. And if anyone has more information about the article or about who the author might be, I'd be delighted to hear it.
Posted by Ludwig at 11:03 PM

Ludwig, greetings.
Thank you for the excerpt from the book. Interesting reading.
Now, about that list of bibliography at the end of the article - one might think that is a list of select spanking models of our current time, funny how history repeats, or predicts, or how no new history is written, only rearranging takes place?! Some Aristotle-worthy thought that one, no?
Anyway, bibliography sources: writings by P. Blake, N. Flynn, C. Grey, A. Haze, A. J. Rutherford - is that the klingon squad that you name in your post as having recently descended upon you? If Yes, then I see how it can be quite distractive being bodily surrounded.
Praytell, what is the copyright year of this copy of the Encyclopedia, please? I tried getting me a copy at amazon, no luck. Is it self-published? Or a late April 1st artifact?

where did your local geek store get that copy of the encyclopaedia? I'm quite sure that it hasn't been officially published, yet. It's going to be the first official publishing, anyway. So far, the "Encyclopaedia of Klingon Culture" has only been a fan project. By the way, as far as I know most of the writers are from Germany. And obviously one of them managed to add that kinky little ritual to the encyclopaedia...

It's good to see that it obviously sparked your interest in Klingon culture... :-)

Oh man, I so love the intersection of geekery and kinkery. Makes my whole day.

Of course Klingons are kinky. There's an episode of the first season of The Next Generation (TNG) where Q gives Riker omnipotence. Riker decides to give Worf a mate (i.e. a Klingon woman). Worf strikes her almost immediately and she falls o her knees.

LaForge: 'Worf? Is this your idea of sex?'

"The non-electric version of the pain stick" - could that be the good old-fashioned cane? :-) Sometimes even sci-fi stories can be exciting.

I recently (while very drunk) watched a Next Generation episode where Data becomes a father of sorts and took 6 pages of notes upon which to base a blog post. I haven't looked over them yet (while sober) but if I ever write that post I will be officially the geekiest spanking model blogger ever.