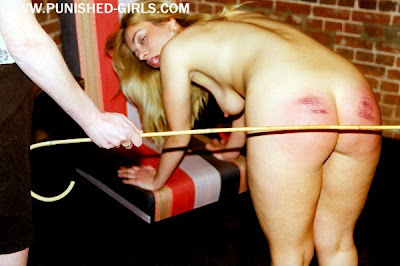 (Picture courtesy of Punished Girls, where you can download the movie)
Producer:
Calstar (released in 1999)
Entire Story In Fewer Words Than Are In This Sentence:
An aid worker and a refugee get spanked
Victim Appeal:
This movie supposedly takes place at a missionary station of some kind in Africa. You wouldn't really know it, of course, because all of the action was filmed at two of Calstar's usual indoor locations. But kudos for coming up with an "international" alibi story for the thrashings this time. The video has two episodes, both of them starring the curly-haired English domme known as Lady Vernon. Naturally, she plays the director in charge of the station, or the camp, or whatever strange outfit they're running down there.

In the first part, she punishes a female missionary worker for screwing around with the local chief's son and generally behaving like a slut (sounds like this employee is in the wrong job line). The victim has straight blonde hair and a big, round bottom. In episode number two, the lady has a very frank and open chat with a refugee girl who has hoarded more than her assigned share of food rations. That is against the regulations, and we can all imagine where things go from there. Fittingly, the model is black, or perhaps half-black, as her skin is a relatively light brown. Like the other victim, she has an inviting, spankable bottom.

The acting of the three participants is rather wooden and the lion share of the video is taken up by the action, anyway. So there isn't really much to write about beyond the physical attributes. Neither of the two spankees, it must be said, is spectacularly beautiful in a classical sense, but I thought the black girl was cute in her own way. As well as that, they both take a reasonably hard beating.
Gratuitous Sadism:
The two CP sessions follow the same sequence of implements as most other Calstar movies: hand, leather (or rubber) paddle, cane. To start things off, the blonde missionary worker goes over the lady's knee for about five minutes. She is spanked over her dress, then over her panties, then on the bare. Afterwards, she has to strip off for the rest of the punishment, which consists of a four-and-a-half minute thrashing with the paddle while she is kneeling on a chair, another four and a half minutes with a longer, thinner paddle while bending over a table, and last but not least, a caning. The girl is made to touch her toes during the finale, which causes her some discomfort ("Can't, Miss!", "Don't say 'can't', touch your toes!"). As usual, Calstar repeat some of the cane strokes from different camera angles. By my count, she gets 10.
Next, it's the refugee's turn to be chastised. Same progression: first, a six minute OTK spanking, over her skirt, over her panties, finally on the bare bottom. All clothes go off for the subsequent action with the paddle, some seven and a half minutes (she only gets one of the two paddles). The girl bends over a chair for that part, and also during the caning that ends the session. Not counting the repetitions, I believe she takes 12 strokes.
As is her custom, Lady Vernon (or whatever her name is supposed to be here) isn't too tender with her victims and gives them a proper, no-nonsense thrashing with the paddle and cane. The former instrument leaves their bottoms visibly reddened while the latter produces a nice set of welts. A middle of the road video in terms of viciousness, not super-severe, but hard enough to be satisfying for the sadistically inclinced viewer.
Best Reactions:
The blonde model from the first episode is by far the more vocal of the two. Her reactions to the beating run the gamut from short, sharp cries to surprised giggles to tearful sobbing by the end. On the whole, I found her pretty annoying, though. She is too squeamish for my taste and flinches too much. Especially during the caning, when the "Touch your toes!" command is quickly forgotten while she jumps around and frantically rubs her bottom.

The black girl takes her punishment with more restraint. She definitely feels the pain and starts crying halfway through the session, but soldiers on without too many complaints. I like that, and I like how she sobs and squirms under the cane strokes, but ultimately manages to hold her position. Finally, after 11 strokes, she has been on her limit long enough and meekly asks for a bit of mercy: "Not so hard, please!" In response, Lady Vernon gives her an especially harsh final stroke, and the girl lets out a loud, pitiful "Ooow!". It's a delightful little moment and a good ending to the better scene in the video.
Best Line:
There isn't any truly memorable dialogue here. One exchange I recall is when the refugee explains that she hasn't really been hoarding food out of her own initiative - one of the relief workers gave it to her because he fancies her. Lady Vernon bluntly replies: "I don't see why he would fancy you, I certainly wouldn't fancy you. The only thing I fancy doing to you right now is punishing you..."

Hardly a great line and pretty mean, actually, but it was kind of cool how the domme said it. As well as that, I like how she - the director in charge of the missionary station! - basically lets on that she does fancy women, as long as she finds them attractive.
Nice Psychological Touch:
When the director lectures her promiscuous employee that she is not supposed to have sexual relations with the "natives", she declares: "As a missionary, you are here to show these people a very cultivated way of living, do you understand? Instead of being barbaric. And you are not at all coming across as a Westerner..." Then she proceeds to beat the girl into obedience. Hooray for enlightened Western values! A nice, brief touch of irony for those who have an eye for it.
How Good Is It Really?
"Caning International" is an average spanking video and fairly typical for this producer - not a classic or a must-see, but not bad, either. There isn't really anything that stands out about it. Except for the backstory, perhaps, which is even more preposterous than usual. However, I like the domme, she is always fun to watch and probably my favourite top from Calstar. There is a kind of rustic elegance and sex appeal about her. Moreover, she knows how to wield a cane, clearly enjoys her work, and even though she is not a superb actress, she usually has good chemistry with the spankees.
What You Learned:
Judging by the lady's fondness for making girls strip, female missionaries are gay, too. Which is not a groundbreaking new insight, I know. But I couldn't think of anything else.
Posted by Ludwig at 7:55 PM