Easter is coming up, so I thought I'd write a little BDSM ode to the Church. Like most Bavarians, I was born Catholic. Well, not literally born, but baptised. I was never a churchgoer and I don't have any strong religious convictions. My parents don't, either. However, the Catholic faith is a part of the Bavarian culture and has shaped the mentality, in a very natural way. Perhaps that is why staunch Bavarian Catholics aren't nearly as annoying or obtrusive as those in some other parts of the world - they don't have anything to prove. I never had a problem with religious people as long as they don't try to force their views on non-believers every minute of the day.
As a historian, I have a certain interest in religion as a cultural phenomenon, and I also find it exciting that we have a German pope for the first time in about 500 years. Benedict XVI. is from Bavaria - he was once the Archbishop of Munich. I must admit that I have some admiration for the man. I disagree with him on many social issues such as birth control or the role of women in the church. But there is no denying that he is a brilliant intellect and writer who sticks to his principles and actually makes some interesting arguments for them. I respect that, because with all our politicians who flip-flop from one election to the next, consistency is all too rare these days.
As well as that, even critics must concede that the Catholic Church has come a long way since the days of the inquisition. Of course, that is where things get really interesting for kinky types like us. "Confessions" obtained by the infliction of severe pain. Monks using the whip for discipline and religious purification. Corporal punishment in strict Catholic schools. Atoning for your sins the good old-fashioned way. Passion plays ripe with scourgings and crucifictions. And don't forget all those sublimely erotic depictions of Christian martyrs, either.
I've always had a special fascination with flagellantism, the practice amongst the more fervently religious to whip themselves (and each other). It can be traced back to ancient times, such as the Dionysian cults in Greece. But it wasn't until the 13th and 14th century that the past-time became really popular. Unlike the monastic orders, the flagellants were laymen who didn't do their penitence in private, but in the city streets and other public places - as a demonstration of piety. And we all know how much fun corporal punishment in front of an audience can be, right? Apparently, their processions and public rituals generated quite a bit of interest all over Europe. 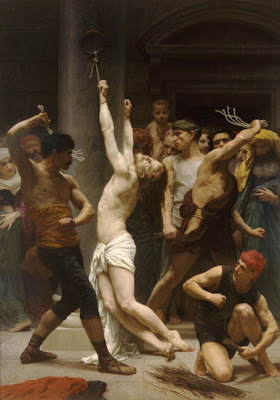 (William-Adolphe Bouguereau, "The Flagellation of Our Lord Jesus Christ", 1880)

The whip was considered a particularly noble instrument because Christ himself was scourged before the crucifiction. It must be said that the ancient Roman idea of a proper whipping, with flayed skin and bones layed open, is a bit too severe even for my taste. Reportedly, many victims died from it. Watch Mel Gibson's Jesus Chainsaw Massacre for the most accurate depiction yet. The only wrong detail is that someone who really had the misfortune of going through the grinder of the Roman justice system would have been fully nude during the flogging. But you can't show that in a Hollywood film, can you?

The flagellants didn't quite kill themselves with the whip, but they applied it with considerable vigour. There must have been some genuinly kinky people among them. And among the ordained monks, too. For example, there was one Italian guy named Dominicus Loricatus, a very zealous Benedictine who was later declared a saint. Legend has it that, during the fasting season, he repeated the entire Psalter twenty times a week and accompanied each psalm with one hundred lashes to his back. The Book of Psalms contains 150 chants, so if my math is correct, that would be 300,000 lashes - in a week! I don't care how saintly you are, you just don't do that unless it turns you on.

I suspect that the public curiosity about flagellant displays had more than purely religious motives as well. For many spectators and members, it may have been closer to the kind of fascination which we in the BDSM scene know quite intimately. After tolerating the movement initially, the church became alarmed by its rapid growth and sometimes manic character. Eventually, flagellantism was outlawed as a form of heresy. Various groups found themselves persecuted by the holy inquisition - from self-torture to real torture, so to speak! Nonetheless, whipping continued to be an accepted form of penance within the church for centuries. Even today, you can see the occasional procession of hooded flagellants in Catholic countries like Spain, Italy or the Philippines.

So, my brothers and sisters, let us embrace religion. Especially the kind where the pious prove their faith in some rather interesting unorthodox ways. Until the church authorities come along and torment them some more. Let us be devoutly grateful for so much historical inspiration. Thank you father, for I have sinned.

On that note, I'd like to wish you all happy (and hopefully kinky) holidays.

The Rammstein boys had to perform a little self-flagellation as monks in the "Rosenrot" video and they apparently found it enlightening. Paraphrasing: “I really felt lighter afterwards. There's always something you want to punish yourself for - it's like a reset button, a release.” (YouTube clip here)

BTW, I love the balletic position of Christ's left leg and foot in that painting.

Actually, the Rammstein video was mentioned in several of the articles I consulted on the historical phenomenon of flagellation. But I hadn't seen this clip before, so thanks! Seems like everyone was having fun.

I love their usual deadpan humour: "I'm not a friend of pain, actually. I like it better when the pain goes away. That's why I enjoy eating spicy food."

Can't say I noticed the "balletic" position of Christ's left leg, either... But yeah, you have a point.

The Jesus Chainsaw Massacre? Mel Gibson will never forgive you, but I think it's pretty damned amusing.

I have a confession to make, I like Mel Gibson. In spite of his weird worldview and drunken rants, I do. He is a much better actor than people give him credit for - watch his early work, before he became an action hero, like "Tim", "Gallipoli", "The Year of Living Dangerously", "The Bounty" and "Mrs. Soffel".

He's also an interesting director. I liked "The Passion of the Christ". It is a simplistic movie and not nearly as historically accurate as it pretends to be - for one thing, the lingua franca in the eastern half of the Roman Empire was Koine Greek, not Latin. This is how the Romans and the Jews would have communicated. It is also extremely unlikely that Pilate knew Aramaic, much less that he would have stooped down and used it to talk to the people he ruled.

There are also some inaccuracies in the depiction of the crucifiction, but most Jesus movies have them - the only one to date that really gets it right is Martin Scorsese's "The Last Temptation of Christ".

That said, "The Passion of the Christ" is an interesting film in its way and certainly shows a strong, if somewhat simplistic artistic vision. It's a different movie from what we usually see, in more ways than one, and I can enjoy that.