Kingdom of the Mind 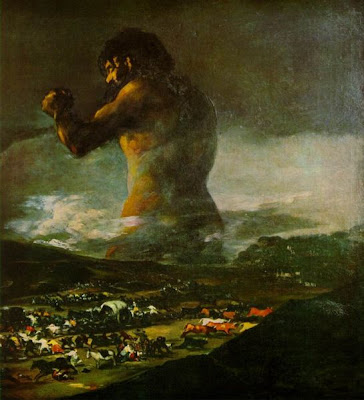 (Francisco Goya, "The Colossus", 1810)
As I wrote in my first post, the title of this blog ("palace") is a reference not only to the fantasy castles built by the real Ludwig, but also to the daydreams which we all construct in our minds. Every spanko does it, and for me, one of the main attractions of CP has always been to get inside another person's head - to discover what makes us tick. The variety and different shades of our inner kingdoms seem virtually limitless.
Wouldn't you love to be able to do it for real? To literally slip into another person, maybe with the help of some fancy futuristic device? See the world through their eyes, feel what they feel, live inside a different body than your own? I suppose it could be mighty interesting for the guys and girls to swap exteriors for a day or two, and not just for sex. Think of the joys of shaving or menstruation! But this, the physical level, would only be the beginning. Imagine the ability to explore another mind in any detail you wish. All their secrets, the hidden desires, fears and fantasies. Not just knowing about them, but experiencing them first-hand. What greater kind of intimacy could there possibly be?
Of course, these ideas are common science fiction themes. They have been explored in the novel Synthajoy by D.G. Compton and films like Brainstorm. One flawed, but interesting film that did it in recent years was The Cell. It's about a psychotherapist who can enter the minds of her patients with a revolutionary new treatment. The police ask her to help with a serial killer investigation. The perpetrator is under arrest, but comatose, and they want to find out where he has hidden his last kidnapped victim. You see, the victim is still alive, but she is automatically being drowned in a tank that slowly fills with water, and there is a certain urgency. So the therapist agrees to venture inside the killer's mind, and needless to say, it is not a pretty place.
"The Cell" is far from perfect. Like any other sci-fi / horror B-movie, it has its share of plot holes and cliches. The cast is okay, starring Vincent D'Onofrio as the killer and Jennifer Lopez in a surprisingly tolerable performance as the psychologist. But the "dream sequences" depicting the lunatic's mental landscape are truly impressive - it's as if Salvador Dali, Francisco Goya and Dante Alighieri had all worked on the film. We also get some fetish and bondage themes - and one wicked scene of torture that is male on male, but so disturbed that you'll enjoy it even as a hetero. In other words, recommended viewing for imaginative kinky people.
In my own private kingdom of the mind, I've rewritten "The Cell" as a spanking movie. It goes without saying that the sadistic madman wins in my version, while the therapist heroine gets trapped in a maze of insanity and loving submission.
Posted by Ludwig at 10:00 AM

Ah yes, when I decided not to pursue my early ambition of being an FBI profiler, I fantasized about exactly the kind of sci-fi psychotherapy in "The Cell". THAT was my dream job. Going inside people's minds to experience firsthand all the twisted goings-on in their subconscious, then emerge and try to find myself again in reality... Actually, it's a bit like some of the scenes I've been doing lately.

From what I know about your taste in movies, Clarice, I think you would like "The Cell". It's no "Silence of the Lambs" for sure - there isn't a whole lot of suspense for one thing, as most of the plot is standard and forseeable. But looking past the flaws, it's a nice little movie and worth watching once.

The "mental landscape" sequences look quite fabulous. I would have loved to post a publicity still from the movie, but was told by a press contact at New Line Cinema that they "don't license for personal use". Ah well, I'll have to stick to old paintings that are public domain.

I never saw the Cell, but thankyou for the recommendation - I will definitely try and get hold of it now!

I think any roleplayer is fascinated by the concept of "becoming" someone else for a period of time. As a geeky girl, I started roleplaying long before I started regularly getting spanked, in the form of fantasy roleplaying games with my teenage friends. And yes, of course, because we were adolescents there was actually far more kinky subtext in those games than any of us would have admitted...

I'm fascinated by altered consciousness and the myriad ways one can achieve it. Who needs drugs when you can reach altered states through subspace in a really immersive scene? :)