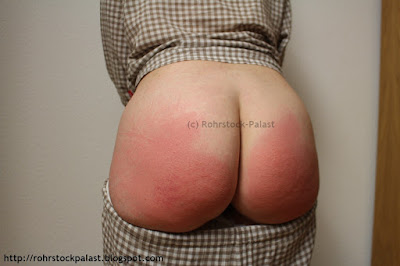 I think this is the first post that contains a picture from a spanking (or, rather, showing the results of a spanking) in a long time! The reason for my spanking was simple – it was my birthday. Nonetheless, the spanking came to me as a surprise. Because until then my birthday had been a very normal day. No special celebration (we did that on a later day), just the normal time schedule and duties.

But in the evening, when the kids were in bed, Ludwig suddenly surprised me with the announcement that I still had a birthday spanking to come. "Wait a moment, why do YOU get a birthday present when it's MY birthday?" I asked. "Since I am a switch, I could give you a birthday spanking on my birthday like most tops do, couldn't I?" Of course, Ludwig thought I couldn't, and my protest had been only half-hearted, anyway.

So my pants came down and I got over Ludwig's knee. I realised that I'm really getting old, because it becomes more and more important to me (and it is harder and harder to make it possible) to find a comfortable position during a spanking. It's enough to have my bottom hurting, I don't need my hands and my back to hurt as well!

Ludwig started with moderate slaps. After all, I am so old now (and he, too) that he needed to save some power and energy for a crescendo at the end of what was about to become a long birthday spanking! But Ludwig insisted that I should count out aloud, otherwise he wasn't willing to take the strokes into account for the final tally. So I did.

"Hey, that's still lots of fun!" Ludwig exclaimed. I, already aching under the strokes which were by now getting harder, replied: "Well, at least one of us is having fun!" - "I suppose my hand will hurt by the end, though." Ludwig mused. For some reason I didn't manage to feel sorry for him.

Ludwig had a good pace for the spanking, giving me enough time to catch my breath in between the strokes. Which was nice, since I struggled with the pain. But I managed to count all strokes aloud and after a crescendo we finally hit the end. Well, almost. Because I couldn't resist asking: "And what about one to grow?" Of course Ludwig didn't want me to miss out on that one. And since chances of me growing are rather low given my age (instead I'm already shrinking), he gave me not one, but two additional strokes.

After I had been allowed to stand up again, I immediately touched my bottom and asked Ludwig whether the marks were quite visible. He told me that my bottom was very red indeed und so we spontaneously decided to take a few pictures. We did not invest as much time on that as we used to when we were still without kids and not so tired in the evening. But we have enough experience by now with finding positions and angles which we like. And so here it is, the picture from my birthday spanking - for you to enjoy! It's quite obvious from the marks that Ludwig is right-handed, right?
Posted by Kaelah at 9:50 PM

I enjoyed the post and the picture. Your bottom certainly doesn’t look “old”. It just looks spankable.

Hello and a request
You have such a popular blog ! Would you please allow some of that popularity to rub off onto our little blog "O&P Spanking Stories"?
Please, please add our blog in your blog-roll...
https://oaksandpines.blogspot.com/
Best regards
Brigitte

A belated happy birthday and many happy returns of the day and of the red bottom!
I don't know how old you are but I'm 33 and birthday spankings are becoming longer and producing a sorer bottom year on year!

Happy Birthday !
And we dont shrink, we grow taller and taller till reaching the stars...

A request
You have such a popular blog ! Would you please allow some of that popularity to rub off onto our little blog "O&P Spanking Stories"? Please, please add our blog in your blog-roll... https://oaksandpines.blogspot.com/
Best regards
Brigitte

@ Gustofur:
I'm glad you enjoyed the post and the picture. Thank you for your kind words!

@ Oaks and Pines:
Welcome, Brigitte, and thank you for your kind comments! Please don't take it personally, but our blog roll only features blogs that we personally read on a regular basis and many of them are written by people whom we personally know. School scenarios aren't our core kink, but the idea of an online role play sounds very nice and we hope you have a lot of fun!

@ Spearthrower:
Thank you for your lovely words! The pyjama is one I wear regularly, it was a lucky coincidence that I wore it on the day of the spanking.

@ Sophie:
Welcome and thank you very much for your lovely wishes! I'm a bit older than you (okay, maybe more than a bit ;-) ), and birthday spankings are indeed becoming longer and longer. :-)

Kids or not , you still have a beautifully spankable bottom . Thank you again for the lovely view
Daddy

@ Daddy:
Thank you very much for your kind comment. :-)

You are quite welcome , i would love to look down at my lap and see that beautiful bottom waiting