This is the second part of my report about our adventures at the Spanking Gerichtshof (spanking court) which Ludwig and I visited last year. You can find the first part here. 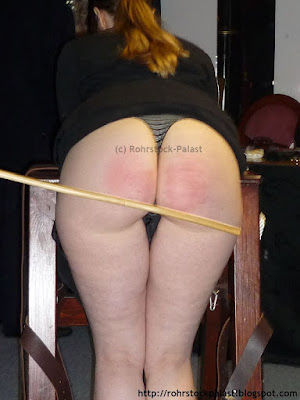 (Of course Ludwig and I also tried out the court bench and the implements as part of our preparation. Thanks to FJ for the picture.)

The event was very well organised by Donpascual aka Ramon Herzog. All charges were written down in advance and sent to the judges which helped us to prepare for the job. Sometimes they also included suggestions for the verdicts. The ideas for the storylines were often created by the soon-to-be defendants themselves, sometimes assisted by their partners (who usually called for a harsh punishment). In case the accused came to the event without a partner, another attendee was assigned to play the role of the prosecutor, so that almost everyone who actively participated in the event found themselves in both roles. Some of the crimes described in the indictments showed a lot of creativity and love for detail (even pictures taken by surveillance cameras were sometimes attached as evidence of what had happened).

There were also a few requests for special punishments from the participants or their partners which were taken into account as long as those who were supposed to carry our said punishments were comfortable with it. For instance, there were requests for an OTK spanking, a cavity search, a male punisher (for a male miscreant) and a birching on the legs. Ludwig and I read the indict and the special requirements and I gave Donpascual a feedback which law suits I felt comfortable leading as a new judge and which kind of punishments I was willing to carry out as a bailiff.

Since Ludwig isn't really into M/M spankings, Donpascual volunteered to do the M/M scene. It was the first one ever which I had the chance to watch live. As those of you who know how much I am into M/M scenes can imagine, that was a really daunting prospect. It was clear to me that I wouldn't do the cavity search (too intimate) and that I didn't feel comfortable birching someone on the legs, either. I wasn't sure about the OTK spanking and told Donpascual that I had to see whether the chemistry with the potential victim was good enough to make me feel comfortable with that slightly more intimate position.

As I always say, it is important that a top's limits are respected as much as those of the bottom. And since I was a normal participant at the party who paid like anyone else, I didn't feel obliged to fulfil any requests I wasn't 100 per cent happy with. That proved not to be a problem at all during the event, though, and all special requests were indeed fulfilled. But I'll tell you more about that later in the part of my series that covers the actual event.

Before we went to the party, Ludwig and I had a few more things to organise, though. There was a dress code for the members of the court which meant black clothes combined with a white tie that would get a batch showing the Spanking Court logo. Fortunately, I didn't need a judge's robe. I could borrow one from Donpascual (it's a mess that I don't have a picture that shows me wearing it). So, we got all our stuff together, packed a bag with the things we needed and were ready for the big day.

When the day had come, we met our friend Fenris and drove to the location together. I definitely wasn't as nervous as I had been when I went to a spanking party for the very first time. But it was clear that this time, I would be much more active than I usually am at spanking events and that I would play with a number of strangers, albeit not as a bottom (I wouldn't have been comfortable with that). Furthermore, the nature of the event would require role-playing skills and I didn't really know what to expect, for instance concerning the participants, the overall tone and the severity of the punishments. Concerning the aspect of severity I knew that I am not a love-taps only type as a top, but it was of course clear that I would only top at a level of severity that would allow me to safely administer a punishment. One thing I wasn't really sure about, either, was how it would be for Ludwig and me to play with others again after a two-year-period of purposefully not having done that. But this is the story for a separated Kaelah's Corner post.

So, we went on the road, ready for adventures and curious what the day would bring.
(To be continued...)
Posted by Kaelah at 7:28 PM

Thank you so much, Kaelah, to continue the review oour event lust a few days before the next date of offenders to face stern judges. Coming saturday we will meet in Augsburg.
The location ist a former "Bundesbahn" supply center for restaurant cars which has been aought by the new owner, Rittmeisterin Gabriele. It consists of a 6000 qm park like area which is blocked for view from the outside. Besides former office space which has been converted to a S/M club there are also basement vaults. Towering over all the buildings is a tall glass house; even the roof is glass. Former green houses have not been modified; there still is a lot of work to be done. Have a look at wwww.spezialevents.de.
At this time of the year, we are taking risks with the weather. If the sun will shine, the glass house will be too hot. Overcast weather would just be fine. In any case, we can move the whole events into park if necessary.
Too bad that you are unable to swing the hammer, this time ;-)). But we hope to see you and Ludwig again.

Sorry folks, it must have been too early in the morning for writing a comment. Please, excuse the many mistakes :-)).

Thank you for continuing to blog. Your adventures are fascinating.

What a brilliant event! Some of the special requests sound very exciting indeed. A birching on the legs! What a great discipline for a naughty sub.....

@ Donpascual:
From what der_Wolf has written in his comment it sounds like the newest Spanking Court event was a huge success! It's a mess we didn't make it this time. I will finish my series about the event from last autumn, soon.

@ Gustofur:
I'm happy that you enjoy the accounts on the event.

@ Anonymous:
The birching on the legs was indeed special and a bit scary! I'll write more about it in the last part of my series about the event.

@ Der_Wolf:
Thanks for sharing your account on the newest event! It sounds like it was a huge success!