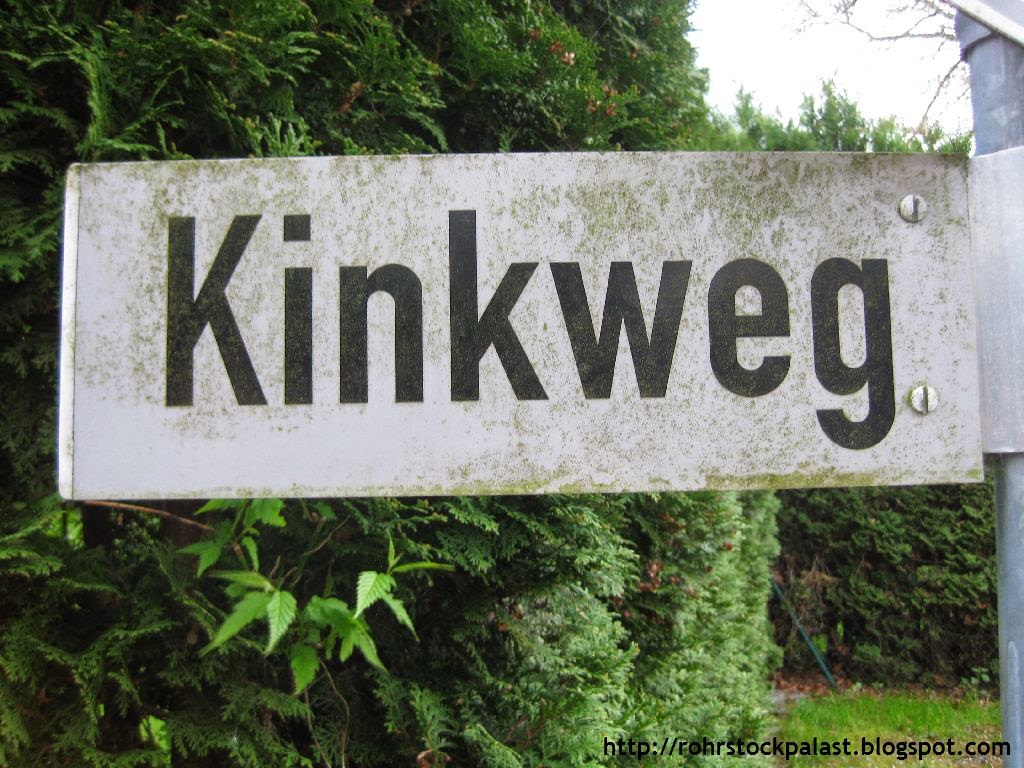 Hello everybody, I hope you had a wonderful April so far. Ludwig and I shared a quiet, relaxed time  last week, going for walks, eating outside in the sun, chatting and meditating. There was a bit of kinky activity, too, but not all that much.

During one of our day trips to the countryside, though, we were unexpectedly reminded of our kink when we came across the street sign shown in the picture above. I wouldn't have thought that there was a "Kink Lane" anywhere in Germany! That's not all, though. An internet search revealed that there are several streets in Austria named Kinkweg, too. So the one we stumbled upon isn't even the only one of its kind. And obviously Austria has more people following the kinky path than Germany...

Wouldn't it be funny to live in a city or street with a kink-related name? The idea made me look for more street names and town names in Germany and elsewhere which refer to spanking in one way or another. And there are many of them! Here is a short selection of what I have found:

The first category of street and city names in Germany and Austria referring to kink contains words that mean spank, hit or beat. Here we have, for instance, Kloppenburg ("Beating Castle"), Schlagenweg ("Hitting Lane") and, my personal favourite, Prügelgasse ("Thrashing Alley").

Then there are the street and city names referring to implements, such as Stockstadt ("Cane City"), Peitschenweg ("Whip Lane") or Rutesheim ("Birch Home"). They all sound like nice places to live in, don't you agree?

The translation of the town name Gertewitz is bit tricky. Literally it could be translated as "Crop Joke" because Witz in German means joke. In this case the ending -witz has a different meaning, though. It's a Slavic suffix for town names indicating that the town is named after its founder or an important person related to the town. So, apparently, there once was a guy named Gerte ("Crop") after whom this town was named.

My personal favourite in the second category is Rohrstock Weg ("Cane Lane"), though. I wouldn't have thought that there was any road by that name! But, of course, it's the Austrians again who have made this possible. Maybe we should move to Austria? I am sure Ludwig would love to live in a lane named after his favourite implement!

There are two more German language names that I found which are related to kink in a slightly different way. The first one is the name of a city in Austria which is called Strengberg ("Strict Mountain"). And the second one is the name of a German island. It is called Rügen, which also happens to be a wonderful old verb meaning "to reprimand". I am not sure how many Germans have that association when visiting Rügen, but I certainly would have.

Of course, German-speaking countries aren't the only ones with kink-related city and street names. There are quite a few Bottom Streets in the US, there is Birchwood near Manchester in England as well as Whippingham on the Isle of Wight. And, finally, New Zealand even has a Spanking Stream! In other words, our kink is everywhere.

How about you? Would you like to live in a place with a kink-related name? Or would you be afraid to blush every time you have to tell someone your address? And have you come across any funny spanking-related street or city names which I haven't mentioned here? Maybe even in languages other than German and English? Please feel free to share your findings in the comment section!
Posted by Kaelah at 10:00 PM

Let's see. Well, in North Carolina there are at least two. Climax, NC and Lizard Lick.

Intercourse PA is a favorite. French Lick IN is another. and of course Climax CO.
Baxter

The classic is "The Wallops" in Hampshire-Nether, Over and Middle Wallop. Derives from the Saxon for stream and contain many "chocolate box" thatched cottages. (Middle Wallop is the home of The Army air Corp)
Also notable are Bircham and Great Bircham in Norfolk near The Queens Estate of Sandringham.
Queen Victoria built Osborne House near Whippingham Isle of Wight.
Whipps Cross in East London is incorrectly thought to have got its name from where those who broke the law in Epping Forest were whipped, b ut is now thought to derive from Fipps Cross, pronounced Wipps in Medieval Times.
I'm sure there are many many more.
There are also a few places named Kilham pronounced Killem, nothing to do with killing or slaughtering pigs comes from Kiln.

I come from Middlesex

@ rednakedy:
Welcome, and thank you very much for sharing your kinky city names! I hope to hear more from you in the future.

@ Baxter:
A very warm welcome to you as well! Thank you for your comment. I hope to hear from you again.

@ jimisim:
Thank you very much for sharing your collection of great kinky names and for all the background information on their origin!

@ Anonymous:
I great name and surely a wonderful place to live.

@ Alex White:
Welcome! That's indeed a funny name. I guess one always has to explain that it is named after a mountain, otherwise people might think that one is kidding them. Thank you very much for sharing and I hope you will write more comments in the future.