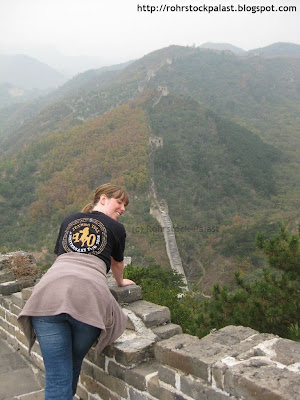 Last month, I shared with you the first set of kinky pictures which Ludwig and I shot on our trip to China in the Forbidden City. In this edition you get to see the second set of pictures which we took on the Chinese Wall! We went to a section which was almost completely empty, it was only our guide and us. 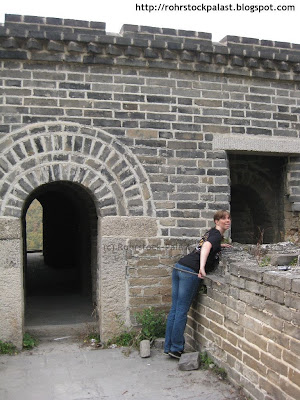 With the guide being around, we could of course not shoot any pictures that were too explicit. But who would pass up such a great and unique opportunity to take photos in such a magnificent historical environment? 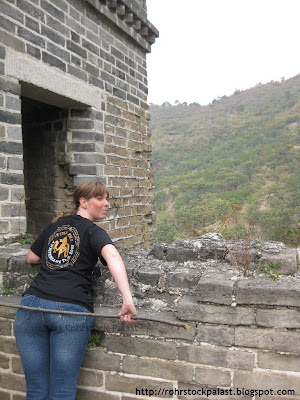 And then, finally, the big chance was there. Our guide was waiting outside the tower while we were still inside. So, in the hope that the guide would not return to look for us, I quickly dropped my pants and bent over the window ledge for this not really perfect but very special picture. 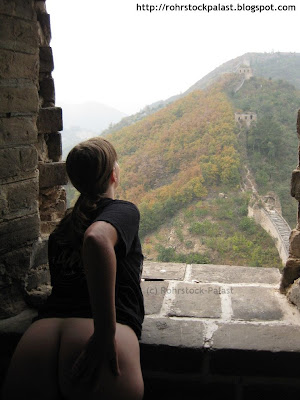 I hope you like this special view of the Great Wall! Wouldn't it be a fascinating idea to shoot kinky pictures at all the famous sights of the world? Maybe in the Colosseum, in front of a pyramid or on the top of the Empire State Building... What about you, have you ever had kinky fun or taken a kinky picture at a famous sight?
Posted by Kaelah at 3:27 PM

Kinky pics at famous sites. Well you have a long bucket list for yourself. We have taken some at vacant overlooks and the like, but no famous sites.

You two are crazy to do so in such a country, but that sounds great. Sure you did it rather quickly hoping not finishing in jail...

Loved the pictures. You were more daring than I was thought when we went there were people all along the great wall.

Glad you had some fun on your vacation in China!-Eric

Yes, Kaelah I too have visited China, and its Great Wall. But of course, I did not participate in any kinky stuff. You were lucky, because if you were caught. You might have found yourself receiving a flogging of 25 strokes with either, a birchrod, cane, or whip. Which of these corporal punishment implements, would you have preferred?.

@ Our Bottoms Burn:
Vacant overlooks sound great! I love the combination of nature and kink.

@ Stan/E.:
Well, if I want a certain picture, nothing can stop me... ;-) Actually, I don't think we would have ended up in jail and I wasn't too nervous, anyway, because except for our guide and us there was nobody around.

@ Ronnie:
Yes, we were very lucky to find a rather quiet section of the Great Wall! Thank you for stopping by.

@ Lea:
Believe me, we were very cautious!

@ sixofthebest:
Good question. Of course I would not want any of them used in a real trial, but as implements for kinky play I find all three interesting. I guess I would choose the cane for the buttocks and the whip for back-whippings.

Sadly I haven't taken a kinky pic, or had a kinky adventure at a historic site, but I do love to travel so maybe one day.

Glad you weren't found out and taken to jail. eek!

Congratulations on your trip to China.
That third picture, it looks like it's turning the venue into the Great View of China...
Going to jail for that, though, I doubt it. It would be very interesting to learn about and even read the law that would have been broken through your behavior.
And no, no personal kinky photo adventures to report. (Mooning while inebriated doesn't count, does it?) Good idea though, will update with changes.

@ fessee13:
Welcome and thank you very much for your comment! I don't think we would have been sent to jail, had anybody seen us. So, no need to worry! :-)

@ Val:
Taking kinky pictures at special places is lots of fun. You just have to be a bit careful in order not to shock any unsuspecting passers-by... ;-)