Are Your Parents Home?

The doorbell rang. I stood up and went to the door. I didn't expect anyone, but I thought that it might be one of my neighbours and so I opened the door. A middle-aged man was outside. He looked at me and asked: "Are your parents home?" The question caught me by surprise, but I figured that he might simply be at the wrong door. Maybe he expected to see a middle-aged friend or acquaintance and now thought that I must be their adult daughter?

"No, they aren't", I answered truthfully. - "It's just, we are selling apples, you know? Home-grown." He hesitated for a moment. "Or, are you already twenty-one? Because then I can sell them to you as well." I smiled. "I am already twenty-one, but I'm afraid we don't need any apples." After a little more conversation, the apple seller excused himself and went on. As I closed the door, I had a grin all over my face. I am used to people underestimating my age. I hated it when I was eighteen or twenty-five, but nowadays I find it cool. Twenty-one, though? Really? That was hilarious, really great stuff!

I think it was good that I didn't buy any apples, though. I mean, I didn't see Snow White's evil stepmother anywhere, but you never know. And since when does one have to be twenty-one in order to buy apples? The legal age is eighteen in Germany! However, of course I had to tell Ludwig the hilarious story on the phone.

And before anyone makes any wrong assumptions: No, when I opened the door, I didn't look like this: 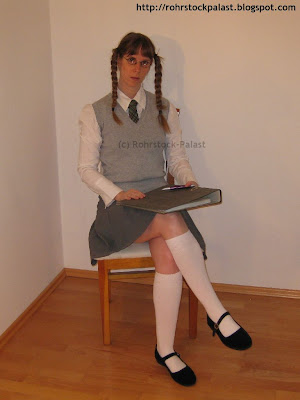 But the idea to shoot a funny adult schoolgirl picture for this post led to a two hour self-photographing session today. Including a self-caning to produce some nice marks. Ludwig would have shaken his head, had he been able to watch my hunt for the perfect schoolgirl picture. Fancy seeing more pics from that set, anyone?

You would look perfect as an adult school girl.
White panties please!

Cute picture! Selling apples door to door? That is too weird.

I fancy seeing any pictures you want us to see.

At first I have to admit that you really look younger than you are (and sweet and beautiful, too), so I can good imagine the thoughts of the apple seller. (On the other hand I found the story strange at all - you're perfectly right: why twenty-one?)

Upcoming to your photo I must say that you are looking like a schoolgirl indeed - except the expression of your face. If I would cut out only your head I would confess everything, awaiting the cane. It's okay and "makes something with my fantasy" ;-) - but it's not the glance of a schoolgirl...

Headmistress: "Why have you brought these girls to me?"
Prefect: "Dorm inspection, Miss. We found apples hidden in their lockers."
Headmistress: "Apples?! Were the girls planning to eat them?"
Prefect: "Apple cores were found in the bin, Miss."
Headmistress: "I am utterly shocked! How dare they?" (Composes herself). "Violation of the legal age for fruit carries a very severe penalty." (To the girls): "You are all going to be caned. You will then dispose of every single apple that remains."

"Fancy seeing more pics from that set, anyone?"
Please, now seriously, what kind of question is that?! :-)
Nah, pics, who ever thought of that - folks are here for the reading, aren't they...
(Well, that too.)
Of course, please, when?

@ Anonymous:
The outfit wouldn't be perfect without white panties, right?! :-)

@ Lea:
I assume that he wanted to offer some kind of contract for a regular delivery of fruits rather than selling single apples, but it was indeed weird, nonetheless.

@ Our Bottoms Burn:
Thank you! More pictures will be coming soon. :-)

@ Olli:
It seems that I can't deny my toppy side, right? ;-) We'll see whether I've got different facial expressions in some of the other shots.

@ Steve from Kent:
That's a hilarious story! Ludwig and I both had to laugh when we read your comment. Thanks for that sweet idea. :-)

Reminded me of Canadian couple who came to Scotland for vacation. She bought schoolgirl uniform and they took a train to Highland. Tne 20+ woman carried off part of a schoolgirl in late teens. Outfitter knew she was an adult but did not turn a hair.
Lovely pic K, please post more.