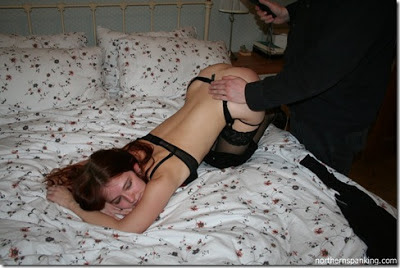 (Kami looks like she is in subspace in this scene. Maybe the top is in topspace as well? Picture courtesy of Northern Spanking.)

In the kinky community, there is an ominous thing called subspace. The term refers to a state of mind which some bottoms reach after an intense scene that goes along with an endorphine rush. Those who have been there describe subspace as a place of bliss, happiness and lightness, of being at peace with the world and oneself. From what I have read, for instance on Erica's, Alex's or Lizzie and Craig's blog, it seems to me that the most common way to enter subspace is a long scene which reaches a certain level of intensity, at least in the end.

Since I am a control freak and since Ludwig prefers rather short scenes, I have never been there. I think the closest I got to subspace was during our very first play session and after my two severe canings. Ludwig usually does rather short but severe scenes as a bottom as well, and he is as much a control freak as I am, so he has never experienced subspace, either. I would love to try it, though, and asked Ludwig for an intense scene involving a one hour spanking with increasing severity, like the ones others often write about. Ludwig told me that he is fine with the idea, as long as I am okay with him reading a book while he is spanking me. Har har!

Which brings me to another question. Do you think that there is something like topspace, too? As I already said, the prospect of dishing out a long spanking using a variety of different implements doesn't hold much appeal for Ludwig. He enjoys short sharp shock scenes, but he doesn't think that he would go into any kind of topspace during a longer scene. It would just become repetitive and boring. The closest Ludwig ever came to an endorphine high as a top was at, or rather, after his Mood Pictures shoot and during our first play together. This obviously wasn't so much due to the action scenes, though, at least not due to the action alone. At the Mood shoot, it was the whole surreal experience of shooting a severe spanking video for an Eastern European producer that caused an endorphine rush. In our scene, it was the long preparation paying off, and the whole beautiful atmosphere and personal chemistry.

For me, the idea of a long scene as a top holds a certain appeal, though. And I think I can reach a certain state of mind when topping which could be called topspace. The first time I topped Ludwig on camera together with Leia-Ann Woods, I went into a very calm and at the same time positively excited state of mind during the whipping. And when I topped Pandora Blake in "Psychic Weapon C", a part of my mind went into the deliberating mindset of the soulless goon I was playing. This wasn't so much due to the action, though, it was due to the role I was playing. And of course, one part of my brain always remained focussed on Pandora's well-being, the interaction with Ludwig, Tom and Pandora and the camera.

There are two more states of mind, though, which are so genuinely linked to our personalities that Ludwig and I can enter them almost effortlessly. It only takes very simple triggers for us to get there. Ludwig's favourite relaxing headspace can be called catspace. I can get him there either by offering delicious food (then Ludwig gets that dreamy "tomcat got milk" look on his face) or by massaging his head. The latter makes him purr instantly. My natural relaxing headspace is the dogspace. Of course, good food works here as well. What is even better, though, is being tickled and groomed, especially when the attention is focussed on my arms, back, legs or feet. That gets me into happy dachshund mode (including happy dachshund sounds) within seconds.

How about you? Have you ever experienced subspace? What does it take for you to get there? Do you think that there is a thing like topspace as well? Have you been there? And do you have another special relaxing mindset, too? How would you call it? We are curious to hear about your experiences! 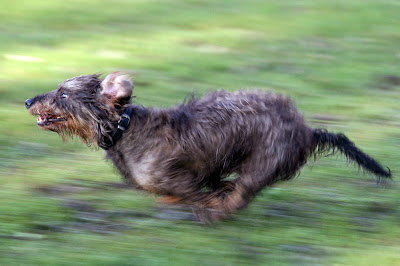 (That's how fast I run when I see a chance of being tickled and petted. Picture found on Wikipedia.)

On a side note: We might not be able to publish your comments as quickly as usually during the next week, so please be a bit patient. Enabling the moderation function was necessary because the spam attacks became so intense that more and more spam comments made it on the blog. With the help of the moderation function we can avoid that while at the same time making sure that you don't have to deal with any captchas when commenting.
Posted by Kaelah at 7:22 AM

As a top, I am in no position to get into subspace. First comes the well-being of the bottom and than for a long time nothing else. That touches - by the way - the old question "who is in control?".

I am getting my dream-state when being fondled and caressed by my wife or close friends on the rare occasions when I am switching.

What I call a Top's High is the wonderful feeling I get after spanking a woman where I pushed all the buttons she wanted pushed in the right order and everything went just right for her and she tells me so. It feels like I am walking on cloud nine for two or three days.

I have entered subspace during a very intense scene, but I have also had some very,very intense play without achieving so-called subspace. I rarely enter subspace, but I do feel terrific when a scene is completed.

When I top,I am too focused to drift off into some kind of top space especially if I am using a cane. But, I am moved emotionally by the reactions of the bottom on my lap and the warmth of her bottom on my hand. And, the sounds made by the female are a turn on as well.

My emotional reaction as a top is very different than how I feel as a bottom being spanked or caned.

I do believe there is such a thing as top space. My current top says he gets into a zone topping me, that he feeds off my reactions and my sounds and feels like he's going to a special place with me. He's still focused, maybe even more so, but he has that same sense of "the world has gone away and it's just the two of us" that I do.

There is definitely both top and sub space. I have written about my first experience of subspace as a guest post on another blog (http://seasonandmichael.wordpress.com/2012/10/21/guest-post-by-longbean/).

My Domme definitely got into a zone during impact play. In really long intense sessions, when she had got into the zone she transferred to sensation play (pinwheel, tickling etc) to prevent any possible injury, although being a ticklish person (which she delighted in)I pulled a muscle very badly during a tickling session after having been on the end of a long flogging.

@ Donpascual:
Thank you for sharing your experiences! You are right, the bottom's well-being always comes first. Still I think that a part of my brain can get into a special kind of state when topping while another part of my brain always remains focussed on the bottom and his or her well-being.

@ Our Bottoms Burn:
That sounds absolutely wonderful, Bogey! I wish I were able to stay in a happy place for several days after having topped (or bottomed for that matter) in a scene.

@ Joey:
Thanks for sharing your thoughts on the subject. The states of mind I am in when topping and when bottoming are very different from each other, too! And you are right about implements like the cane which are difficult to handle, one has to stay very focussed when using them. I think that being fully focussed on the task at hand plus the reactions of the spankee is part of what I would call my personal topspace, though. Similar to the experiences I have when bottoming, it means to be completely in the here and now.

@ Erica:
That sounds indeed very similar to how I would describe my usual topspace. I am focussed on the bottom's well-being, but I also feed off the reactions which I get and I am fully in the here and now. I think that feeling of going to a special place together absolutely comes over in your scene descriptions on your blog! I cross my fingers for Mr D's situation to improve soon, so that the two of you can spend more time together again.

@ thelongbean:
Thank you for sharing your experiences! Being careful as a top when getting too deeply into a zone sounds very reasonable. I have never experienced a state of mind that went so deeply when topping. Ludwig is ticklish, too, and I love to tickle him from time to time! Straining a muscle doesn't sound very nice, though. That's definitely not the part of the body one expects to hurt after an intense flogging!

I have heard a few tops talk about going into a sort of topspace but I don't have a grasp on what that involves. I have gone into what I would call subspace. It doesn't happen often and as you state has been when things are more physically intense and longer. It also highly depends on my mood and emotional state going into it.

@ Lea:
Thank you for sharing your experiences. Maybe I will experience subspace one day after an intense scene when I am in the right mood.