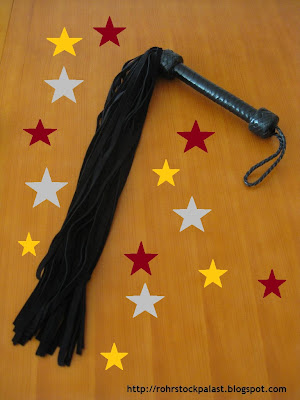 Magical stories are a wonderful inspiration for kinky fantasies. The Male-Male Spanking Archive, for instance, features more than 300 Harry Potter-themed stories. The great thing about magic fantasy worlds is that you can have magical implements as well. But how about the real world? Ludwig surely thought that I must have been shopping at Diagon Alley when he recently took a closer look at one of my receipts.
“What's that?” he asked me, his voice showing curiosity. “What do you mean?” - “I'm talking about this item you've bought here, young lady, a MIRACLE WHIP.” Ludwig looked at me expectantly. I smiled. “I'm sorry to disappoint you, honey, but this is a supermarket receipt and they don't sell the kind of whips you have in mind.” Actually, they don't sell any kinky items at all, except for pervertibles like hair brushes, belts or wooden spoons. “And”, I added, “two Euros would be very cheap for a real miracle whip, right?”
“Okay, what is it then?” Ludwig asked, “I already assumed that it isn't anything kinky, but I've really never heard about it.” “It's a salad cream which I use for potato and noodle salads”, I explained and brought him the still half-full jar from the refrigerator. 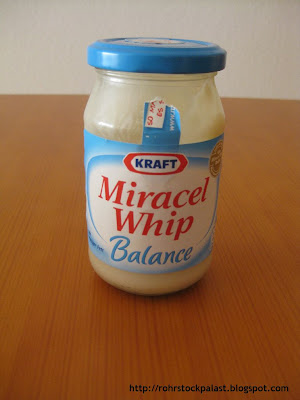 Well, I have to admit, I would have preferred to show Ludwig a kink-suitable miracle whip instead of Miracel Whip cream (they obviously don't even know how to spell the word miracle correctly). How would that implement look like, though? And what would it be able to do that ordinary whips can't do?
However, this little episode taught me two important lessons: 1.) My mate is indeed the kinky like-minded spirit I had always been looking for. 2.) I should invite him more often to shared cooking experiences...
Posted by Kaelah at 6:39 PM

Funny. Around here it is spelled correctly, and it never fails to make me look around, make sure no one read my mind while looking at that label...
Also, I am sure no one doubted that Ludwig's mind was not in the right place, ever.