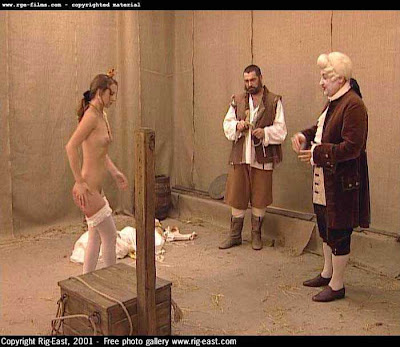 Producer:
Rigid East (released in 2001)
Entire Story In Fewer Words Than Are In This Sentence:
Maid and princess punished for breaking vase
Victim Appeal:
Two lovely Czech ladies are soundly caned in this old Rigid East film. Both of them have also starred in early installments of the "Headmaster's Study" series. One of the victims is the blonde who plays the signature-forging schoolgirl from A Note for Absence (actually, you can still see marks from the thrashing she takes here in the headmaster video). In this fantasy story, she is cast as a typical fairy tale princess. Well, the difference between her character and other fairy tale princesses I can remember is that we see her naked and whipped, of course - but fairly typical otherwise! As I noted in my review of her other movie, I quite like the girl. She is cute, has a pretty face and expressive eyes, and she is also interesting as an actress. With a performance that ranges from meek and sheepish to haughty and indignant, she hits all the right notes as the spoilt, but ultimately humbled princess.

The other victim, who plays her chambermaid, is dark-haired and also quite pleasant to behold. She is attractive, but with a somewhat more down-to-earth look fitting the role, and she shows some decent acting. Overall, even though there are only two spankees, this is one of the more memorable old Rigid East titles for me in terms of victim appeal, in a fine example of quality over quantity.
Gratuitous Sadism:
In addition to the princess (who also has two sisters, played by twins) and the maid, the movie features a variety of other stock fairy tale characters: a regal and strict queen, a chamberlain with white wig and powdered face, a rugged stableman, and a court jester who narrates the entire story to the audience and leads us from one location to the next, introducing the scenes.

Here is the plot in a nutshell: while playing blind-man's bluff with her sisters, the blonde princess accidentally knocks over one of her mother's precious vases. She gives the maid, who has witnessed the whole episode, a gold coin for her silence. Needless to say, the queen is not amused when she discovers that the vase is broken, so she summons everyone before her. But the maid refuses to give the name of the culprit, so the queen orders her to be beaten until the girl finally talks. Then, as you can imagine, it is the turn of the princess to get a taste of the cane - not just for destroying the vase, but also for lying to her mother. In this fairy tale, royal blood is no safeguard from a thrashing!

The CP is carried out in a barn, where the bearded and burly stablehand canes the victims under the supervision of the glib, powder-faced chamberlain. The two of them make for a rather funny duo of torturers, high in contrast. While the chamberlain plays the assiduous, grovelling servant in front of the queen, he has a hidden sadistic streak and clearly enjoys seeing the girls in pain.

During their ordeal, the spankees are tied to a wooden pillory. They kneel on the platform with their bodies in an upright position. I like the device and the pose - there is nothing fancy about it, but it looks sexy and is not something you see in too many spanking films, actually. The maid gets 32 strokes until she finally cracks and tells her interrogators what happened with the vase. In the second action scene, the princess receives 33 strokes for her comeuppance (one more than the chambermaid). In typical Rigid East fashion, the canings are severe, producing dark purple welts and beautiful screams. The spanker isn't the most accurate in the world and some of the hits land a little high, but he does a solid job overall. Good, sadistic fun.
Best Reactions:
The princess really steals the show here. While her reactions to the caning itself aren't all that different from the maid's (hollering at the top of her lungs, basically), it is her simmering, indignant rage and her proud defiance that make the scene special. From the beginning, she makes it obvious how she despises the chamberlain and the stablehand, who are after all well below her in status. But they are the ones who get to chastise her on her mother's orders, so the young lady has to go along with it, and she hates every minute of the punishment - the humiliation (by these people!) even more than the pain.

The actress nails the part perfectly. Watch as she has to strip naked in front of her tormentors, seething underneath her calm haughtiness, casting cold, angry glances at the men like bolts of lightning. It's a glorious sequence, intense, well-acted and well-paced. There is a nice moment during the caning, when they give her a short break after the tenth stroke and the chamberlain approaches her with a handkerchief - ostensibly to wipe away the lady's tears, while his real intention is of course to ogle her suffering. She knows it, too, and angrily turns her head away. Even as the caning gets harder and harder, her shrieks louder and more desperate, until she is sobbing uncontrollably and her ass is covered in vicious welts, the princess never quite loses that spark of defiance. Which, as you should know by now if you have followed my reviews, is the kind of spirit I like.
Best Line:
"Once upon a time..."
Nice Psychological Touch:
In a word, I loved to see the princess caned. Not only because it's a hot scene and the girl is interesting, but most of all because it simply tells us: princesses get caned, too! Being a young lady of noble standing, even a member of the royal family, does not protect you from a thrashing if you misbehave. I must say, that is something I really like about this fairy tale universe here. I may be an elitist intellectual snob who names himself after a crazy Bavarian monarch and writes mini-essays about Shakespeare and kink - but when it comes to corporal punishment, I have a firm egalitarian streak. So it was magnificent, wicked fun to watch her royal highness get her just desserts.

Rigid East make the most of the scenario by staging it cleverly. Seeing the maid whipped first and then the princess creates an augmentation "in terms of class", and a sense of anticipation followed by the satisfaction of our desire for justice - the loyal, innocent chambermaid has suffered for her mistress, so now we want the real culprit to suffer.

Moreover, the film emphasises the ambivalent power dynamics behind the chastisement of the princess in a most humorous manner. When the exalted young lady is lead to the barn, the chamberlain holds the door open for her and bows deeply. All the time, he treats her with unfailing, stressed politeness and fawning subservience, which of course only underlines the man's barely concealed glee about her shameful ordeal. The actor does a fine job and the results are hilarious to watch. I also liked how, in another twist of irony, they made the princess strip her clothes off, but let her keep the tacky little crown on her head. When the caning is over, both the chamberlain and the stableman bow graciously to their victim before untying her.
How Good Is It Really?
Together with Wild Party and its sequel, this is probably my favourite among the old Rigid East films. In terms of story and wit, it is better than the other two, and the severity is pretty decent, too. Although short (26 minutes only), it is also one of their more elaborate early projects, with nice costumes, good technical craftsmanship and frequent use of background music (except during the beatings, of course) - actually, with the setting and the characters, the whole thing plays almost like a mini-opera.

Given its subject matter, "The Fairy Tale" does not have the oppressive and pleasantly disturbing feel of some of the other RGE / Lupus movies. It's a different kind of gem, a light-hearted fantasy romp full of fun and eye-twinkling humour. Mind you, the beatings are as hard as ever, just packaged differently, and sadistic viewers will definitely be satisfied. Nice cast, nice atmosphere, nice victims (I'm in love with the princess), nice story-telling... In summary, a highly recommended CP video.
What You Learned:
Some fairy tales are definitely not for children, but all the more interesting for kinky adults.
Posted by Ludwig at 11:15 PM

For me this photo from the movie the 'THE FAIRY TALE' is erotisism at its best. I sure would love to cane this beautiful naughty woman's bare bottom with a swishy cane.

The caning scene in the movie THE FAIRY TALE, gives me an sexually exciting feeling. The feeling is I want to be there, and deliver those painful strokes of the cane on that naughty woman's bare bottom. 25 very hard strokes of the cane.