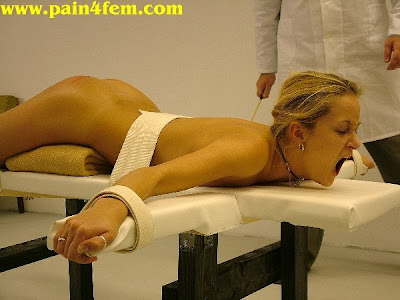 Entire Story In Fewer Words Than Are In This Sentence:
Fare dodger learns a valuable lesson

The story is set in a society where judicial corporal punishment is reintroduced as a measure against petty crime. It begins as one of the girls, played by Miss Sheron, receives a letter informing her that she has been sentenced for repeatedly sneaking rides on public transport. As an alternative to a prison term, she can choose a caning. Terrified, the young woman calls her friend who got caned for shoplifting six months earlier. While the two of them sit in the kitchen, the friend recounts her tale and we see a flashback of the ordeal. Afterwads, Miss Sheron decides to opt for the CP instead of prison and gets her own thrashing.

Gratuitous Sadism:
Before the punishment, each of the girls has her pulse and blood pressure examined by a (ridiculously young and cute) female doctor. Then they have to use the toilet and "empty themselves" so they don't urinate during the caning. Naturally, that takes place before the doctor's eyes, too. The tone is matter-of-fact and and rather polite, actually, but it is of course a humiliating experience. Finally, the victim is tied to a crossframe and an official administers the caning. At random intervals, the doctor yells "Stop!" and exmines a girl's marks or pulse before the thrashing continues. When it is all over, the stripes are treated with salve before the girl is allowed to get dressed and leave.

The canings are moderate in severity, neither too light nor very hard, but quite long. Katty gets 50 strokes and Miss Sheron receives 45. By the end, their bottoms are thoroughly covered with clear red lines and there is also a hint of bruising. Nothing vicious, but a proper punishment nonetheless.

Best Reactions:
Both girls show nice reactions, rather vocal and loud, but not irritatingly so. In addition to the screaming, Miss Sheron throws in a bit of desperate gasping and sobbing. But Katty is my choice here. I can't put my finger on why, exactly, but there is just something about the sound of her screams and the way she sometimes lets out two or three in succession after a cane stroke. Her wide-eyed pained expression as she looks into the camera is also very satisfying.

Best Line:
There really isn't anything of note in the dialogue. The best I can think of is Miss Sheron's lame excuse for dodging the public transport fares: "I couldn't afford a ticket at the time." Yeah, we've heard that one before, haven't we? An extra ten strokes for lack of originality, please.

Nice Psychological Touch:
Like many other Pain4Fem titles, this one is very heavy on procedure - the letter informing the girl of her impeding chastisement, the medical checkups before and during the caning, the mandatory emptying of the bladder, and so on. Nothing really happens in terms of story, it's more like a training video on "How to Follow the Official CP Regulations". Some people will probably be bored, while others like me while find it quite captivating.

A few of the scenes are a bit overlong, but generally speaking, I like the dry documentary apporach and the almost clinical feel. It's a perfect portrayal of clean "civilised" corporal punishment in the modern age - even the caner is wearing a doctor's overall! There's a jarring contradiction between the brutal primordial nature of the beating and the various precautions surrounding it, like pulse checks and aftercare with salve. Arguably, such niceties only serve to make the punishment more sadistic, and the mad scientist in me is loving it.

Another contrast that works well here is the one between the action in the sterile white CP room and the cozy kitchen scenes where the two girls sit and talk. Plus, I thought it was a good idea to show one caning as a "flashback" while the other is "still about to happen". This way, while you have two almost identical action scenes in succession, one of them disinctly feels like the main course.

How Good Is It Really?
I liked "Judicial Caning" a lot. The technical craftsmanship is good, the two models do a fine job and the thrashings are pretty solid. I love the setting most of all, the idea that someone receives a letter in the mail and then reports to the "Palace of Justice" for corporal punishment in these surroundings which are more reminiscent of a medical practice than a correctional facility. Interestingly, one of my own erotic fantasies that goes back to adolescence also involves CP for dodging fares - maybe because it's the one petty crime pretty much everyone commits at least once. So I'm happy to see this brought to the screen. One of my favourite Pain4Fem movies.

What You Learned:
There should be technical awards for spanking movies. You know, like the Academy Scientific and Technical Awards they give out annually just before the Oscars. And the caning bench in this video should get one, because it is among the best I've seen. The white frame, the seven different restraints, the slightly raised position of the victim's bottom, it's all very sexy indeed. Oh, and one more thing - Eric Clapton must have written the flm music, because one of the themes sounds just like "Tears in Heaven".
Posted by Ludwig at 10:37 PM

"I like Miss Sheron in particular, who is blonde, slender, wears glasses and has a most spankable bottom"
Nice to hear that I am not the only one with a thing about women wearing glasses. :-)

Prefectdt, you're far from alone for having a thing for women wearing glasses! :) Sophie from GBS wore glasses from time to time as well as Gina Moon from Northern Spanking, to name only them.

(Ludwig, if only you could convince dear Miss Flynn of wearing glasses for a scene...)

This is one of my personal favourites as well, for the same reasons that Ludwig identified. I love the cleanliness of it. It's almost completely detached from emotion, which gets my kink going. I also love the procedural aspect; if I had to write a fantasy scenario, it would be very close to this.

Oh, I definitely have a thing for women wearing glasses. I'm not fanatical about it and wouldn't go as far as describing it as an independent fetish or anything, but they do look incredibly sexy on some girls and in the right role.

Smallhanded, I think a scene with Niki wearing glasses is an excellent idea. Actually, it is one I have already thought about myself. She has that geeky "girl from the library" look, anyway, which I love and lust after. Glasses would just perfect it.

I'll ask her about it. If she rejects the idea, I'll just put her over my knee and we will see how long it takes to change her mind.

In all countries of the world, the courts, should have 'Judicial Canings'. This is where legally a naughty woman can be brought to, and if found guilty, given deservedly a good birching, or caning. In the 'good old days' they had the whipping post. Why don't we bring this idea up into the 21st century?.

Anonymous: The reason why we don't bring back the "good old days" is that we (or at least most of us) regard corporal punishment in schools or in the judicial system as incompatible with the concept of human rights and the values of an enlightened society. As well as that, its actual usefulness, the "educational effect", is debatable.

I think the vast majority of my kinky readers shares my views. As for you, I appreciate that you're probably just kidding around, but to be honest, I've heard better jokes.